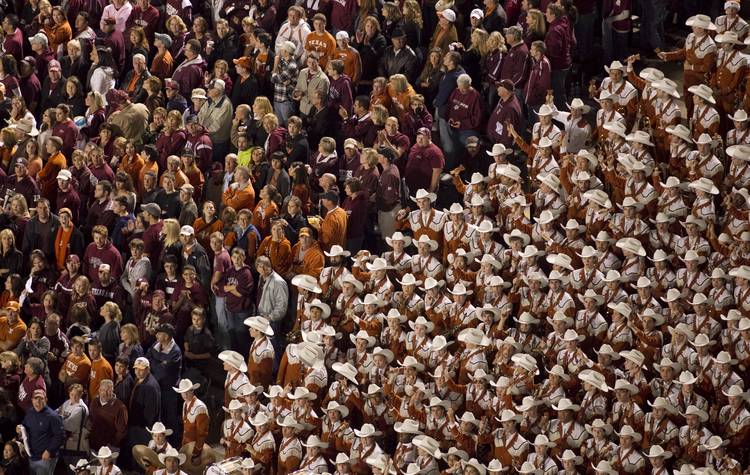 The Longhorn Band members and others watch the UT-A&M game in the first quarter at Kyle Field in College Station on Thursday Nov. 24, 2011. (Jay Janner/AMERICAN-STATESMAN)

Texas coach Tom Herman said this week that he wants to play Texas A&M but added, “That’s well above my pay grade.”

Longhorns and Aggies fans can turn up their noses and dismiss the rivalry’s renewal. But school officials in Austin and College Station are always interested in bumping up season ticket prices. If you think Texas and A&M officials wouldn’t examine the financial ramifications of restarting their century-old rivalry, then you don’t understand the business of college athletics.

“Initiate talks?,” Herman asked at Big 12 media days. “Maybe what I said right there might initiate something. I don’t know.”

Set aside all the political ramifications, bruised feelings and egos and look at things on a practical level. Could Texas and Texas A&M both carve out a spot on their schedules?

Texas plays nine Big 12 conference games; Texas A&M has eight SEC games. That leaves only three available non-conference games for the Longhorns and four for the Aggies on a 12-game schedule.

Both UT and A&M are already full for 2018 and 2019. Game contracts are drawn up years in advance, and there’s usually a stiff financial penalty if either side pulls out. For example, Texas is scheduled to host Tulsa next season, and the Golden Hurricane are expected to receive a $1.1 million payday.

From A&M’s point of view, the game would have to be played at Kyle Field on even-numbered years — think 2018, 2020, 2022, etc.; A&M hosts Alabama at home on odd-numbered years for the foreseeable future.

It’s a perfect marketing opportunity for A&M. A season-ticket holder would know that either Alabama or Texas would be coming to Kyle Field every year. As of now, LSU fills that void by coming to College Station in even-numbered years.

Believe it or not, there is a workable window, just not one tomorrow.

The Longhorns have only two non-conference opponents on the books for 2021 — at Arkansas on Sept. 11, and home against Rice on Sept. 18.

If A&M athletic director Scott Woodward is unwilling to break a contract with UAB (2018) or Fresno State (2020), the first available opening at Kyle Field would be in 2022.

“We have to really assess what is our best path to winning the (SEC) West,” Woodward told the Marble Falls Daily Tribune in April. “I don’t foresee anything happening in the near future. There are a lot of opinions well above my pay grade. Rivalries, I think, are healthy for the game.

“It’ll be something we’ll consider,” Woodward added. “It’ll be a discussion I’ll have to have. I have no objection to it. It’s something that has to work for us and for folks.”

Texas hosts LSU as its marquee home game in 2019, but there’s still a schedule hole in 2021. Rice and Central Florida are UT’s two home games in 2023 along with a trip to Ohio State.

Next, both Woodward and UT’s Mike Perrin would have to think about when the game would be played. Would it be the season opener? It’s likely that both teams would want to play a lesser opponent early. So what about late September? Or in October? Or November?

Texas officials would not even discuss moving the Oklahoma game from the second Saturday in October. Would either school be open to a Thanksgiving reboot believing their team would be in a conference championship hunt?

“Me, personally? I think over the course of time that’s going to happen,” A&M coach Kevin Sumlin said in June. “With our move to the SEC, scheduling has become a real issue.”

Yes, it’s a real issue, to be sure. But let’s not act like it’s an impossible one.

“It makes a lot of sense to me,” Herman said. “But we’ll worry about that in January.”