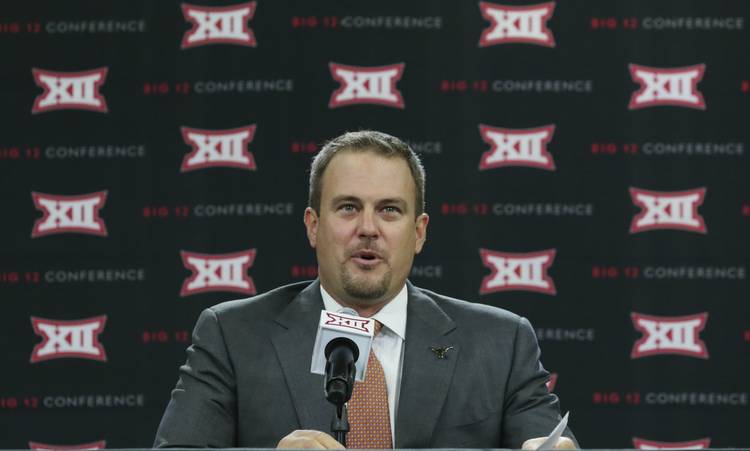 HOUSTON — When Charlie Strong got the Texas job in 2014, he got off to a rocky start with Texas high school coaches. Judging from his later recruiting efforts, he overcame whatever misconceptions people initially had.

At this year’s statewide high school coaches convention, new Texas coach Tom Herman is being welcomed with wide-open arms and getting bear-hugged.

Katy coach Gary Joseph, a high school coaching legend, stood before 3,000 of his brethren on Monday and proclaimed, “He’s one of our own.”

To a large extent, that’s accurate. Strong had never coached in the state whereas Herman’s been at six different Texas schools on and off since 1998.

No college coach can succeed without the help of the high school coaches. Thus, Herman isn’t taking any chances. Monday’s two-hour presentation that Herman gave inside the George R. Brown Convention Center left no doubt about his simple policy for high school coaches: Come one, come all.

“I feel like I’ve grown up with these guys in this profession, and if I can share anything with them, I’m always happy to do it,” Herman said after his remarks. “And hopefully I can make a small, tiny difference in helping them become better coaches.”

February, March and April are now all-access months at UT for Texas high school coaches. For those who come to Austin, you can watch all the tape you want and sit in all the Longhorns meetings. “Right next to Malik Jefferson,” said Bob Shipley, UT’s director of high school relations.

Really? Sit in the meetings? Attend every spring practice? That flies in the face of some coaches’ thinking. Some believe they’re guarding state secrets.

“I feel it’s our obligation at the University of Texas that if the high school coaches want and need information and it’s going to make them better, we have a duty to provide that to them,” Herman said.

Considering the long line of coaches who wanted to get their picture taken with Herman while holding up the Hook ’em hand sign, there are plenty folks interested. “I just know that every time we talk about it,” Shipley said, “he reiterates to me that high school coaches have all-access to everything we’re doing in the spring.”

D.W. Rutledge, the executive director of the Texas High School Coaches Association, said he loved Strong’s disciplined approach. “But he was used to recruiting in Florida and places like that where, frankly, they don’t get the high school coach involved,” Rutledge said.

The road through any fieldhouse in Texas always, always, always goes through the head coach’s office. “I think Tom and his staff understand that, and it’s very obvious to the coaches,” Rutledge said.

Texas offensive coordinator Tim Beck and tight ends coach Corby Meekins have both been high school coaches in Texas themselves. Beck, echoing Herman’s comments, said there are no secret plays. It’s all about the relationships.

Herman spent the first hour on Monday just “talkin’ ball,” something that’s ebbed and flowed over the years at this event. For most fans, a presentation titled “Gun Play Action, Pass & Break Contain” is plain, old gibberish. To coaches, it’s poetry.

“All right, here’s the switch release, and this so good for when teams are playing first-in, first-out,” Herman told the crowd. In broad terms, he did outline the UT offensive philosophy. It’ll be a pro-spread styled offense that uses play-action pass out of the shotgun.

After 45 minutes, Herman posted his graduate assistant’s business card and email address for those who wanted copies of the slides. The second hour was all about philosophy. And eight months in, it’s clear this is where Herman shines.

Look at this line of HS coaches who want their photo taken with Texas coach Tom Herman. pic.twitter.com/VJQOttHxw9

Touching on personal accountability, leadership and the ever-present threat of losing, Herman gave high school coaches a little dose of everything.

“I tell people all the time, from the time I wake up to the time I go to bed, if I’m not a better husband, father or head coach at the University of Texas, then why did I get up in the morning? What the hell did I do?,” Herman said.

“If I didn’t become better in one of those areas of my life, hopefully all three of them, then why the hell did I wake up?,” he added. “Just to check the box? Hey, I woke up, punched the clock and then went to bed. That seems like a pretty miserable existence.”

Assistant coaches are responsible for knowing their players’ girlfriend names, their mothers’ names, what’s going on in their lives and anything else imaginable.

Love, as Herman has said numerous times, is spelled T-I-M-E. Ultimately, Herman said, “That position coach has invested so much time in this young man’s life that (the player) can’t possibly let him down.”

Herman touched on the importance of community service and noted how the football program has never won the Bevo Cup Award, presented by UT’s Student-Athlete Advisory Committee. Currently, the football team has a 300-point lead.

“Is it good to do all that community service? Yeah,” Herman said. “But if they’re going to keep score, we’re gonna win the damn thing.”

And the congregation said amen.

“Anything you need, any assistance that we can provide, just know that we’re always there,” Herman told the crowd. “And with that, thank you, have a great rest of the day and Hook ’em, Horns.”