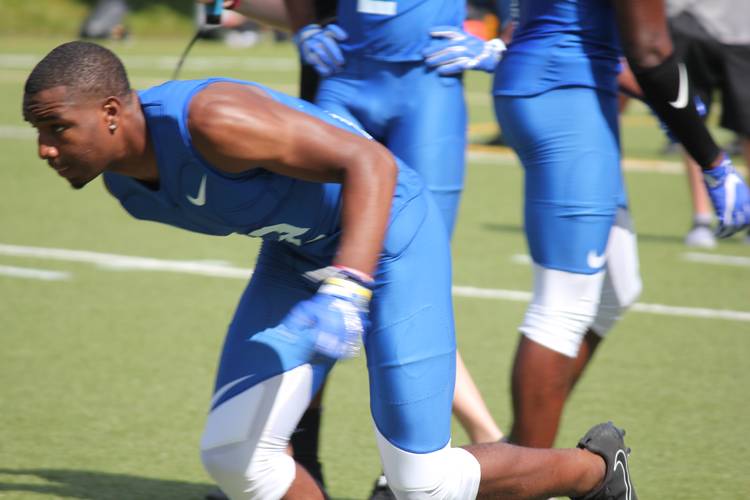 Alief Taylor wide receiver Brennan Eagles became Texas’ 14th member of the 2018 class, and its third wide receiver. The future U.S. Army All-America Bowl participant is a four-star talent ranked No. 12 on the Fabulous 55. He is the No. 5 wide receiver prospect in the nation, per 247Sports Composite.

Eagles, who was originally slated to announce July 17, noted “technical difficulties” as the reason for the delay while in Oregon for The Opening Finals. As a junior, Eagles caught 55 passes for 1,069 yards and 13 touchdowns.

Skill set: At 6-foot-4 and 214 pounds, Eagles is a big-bodied wide receiver who can immediately handle the extra physicality of the college game. He’s also plenty fast, recording one of the top 40-meter dash times at The Opening regional in Houston in early Feb. His talents earned him an invite to The Opening Final in Oregon, where he performed well despite battling a lower-leg injury throughout the 7-on-7 pool play.

Eagles, a four-star talent, ranks as the No. 29 overall prospect in the country, per 247Sports Composite, though numerous services rank Eagles as a five-star. He’s raw as a pass catcher and route-runner, but 6-foot-4 wide receivers with his athleticism are simply hard to find. Eagles’ contains more upside than any receiver in the state during the 2018 cycle.

Immediate impact: It’s never easy for wide receivers to make an immediate impact. Even talents like Collin Johnson struggled to find consistency in year one on campus. Eagles is likely no different. His unique skill set means he could be used as a part-time threat on deep routes, on third down or in the red zone. Players like Johnson, Lil’Jordan Humphrey, Devin Duvernay and Reggie Hemphill-Mapps will still be on campus by time Eagles arrives.

Fitting into the program: Texas needs big, play-making wide receivers and Eagles was the best available in the state. His size offers mismatches against smaller cornerbacks and his speed means safeties must take him into account on vertical routes. Eagles is another player from Houston, joining Al’Vonte Woodard and B.J. Foster, and there are more surely to follow. Eagles is hardworking and low-key, traits that Herman appears to like in football prospects.

Recruiting at the position: Eagles is the third wide receiver committed to Texas, joining slot receiver Rondale Moore and Woodard, a 6-foot-1 wide receiver capable of playing outside or in the slot. All three are rated as four-star recruits, and the trio all participated at The Opening Final in Oregon. The Longhorns want to add at least one more wide receiver, with Jaylen Waddle and Tommy Bush topping the current target list.