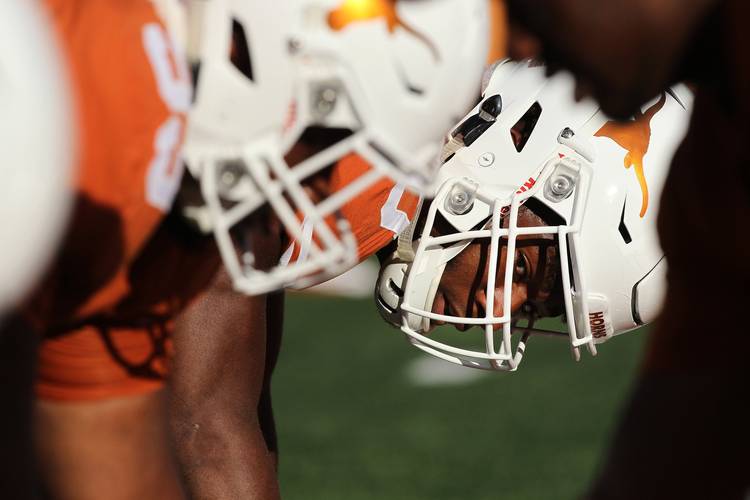 Over the past three seasons, Naashon Hughes has started 26 games. Only safety Jason Hall, with 28, has more. Hughes has appeared in 37 games and, having signed with Texas in 2013, is one of only two remaining players on the roster that was in Mack Brown’s final Longhorns signing class.

The senior linebacker, though, isn’t letting his age show. At least not in Texas’ refurbished locker room. No, the savvy veteran made sure of that. Now it’s senior cornerback Antwuan Davis — the other Longhorn who signed with Brown in 2013 — who’s known as UT’s old man.

“I called him ‘Old Man Davis’ a couple of times and then guys (followed my lead),” Hughes said at last week’s Big 12 media days in Frisco. “That got the heat off me a little bit, so I’m good.”

On a couple of occasions, Tom Herman has told the story about his first meeting with the team late last November. As he began, he asked if anyone there had ever been on a UT team with a winning record. The only ones to raise their hands were Hughes, Davis and non-scholarship kicker Mitchell Becker, all of whom redshirted in 2013.

That moment reinforced Herman’s stance that “we don’t know how to win really well right now.”

“For three people to raise their hands, that’s not the Texas standard at all,” Hughes said. “I think that was an eye opener for a lot of people. The only three people that have been there are seniors, they’re about to get out of here. Nobody else has been on a winning team, and nobody came to Texas to lose.”

Hughes has been through three head coaches in five years. He’s been used as both a linebacker and a defensive lineman. He’s reported to seven different position coaches as a Longhorn. And he’s trained under three different strength coaches.

Change, though, is something Hughes is accustomed to.

He’s the son of an Army sergeant. Hughes was born in Bad Nauheim, Germany. Over the years his family has moved to Louisiana (twice), Texas (again, twice), Pennsylvania and Baltimore.

The family eventually settled in the Killeen area, and Hughes ended up playing at Harker Heights. A two-time all-district player, he originally accepted an offer to gray-shirt at Texas. But he was a scholarship recipient by the time national signing day rolled around in 2013.

“With the coaching changes I’ve been through, I’ve been able to embrace the things they’ve had to offer, just basically from my background,” Hughes said. “Being able to move, make new friends, have new teachers from grade-to-grade, just completely new schools and new cities, just being able to accept that and move on.”

Hughes is 6-4 and 260 pounds and might as well earn the nickname “Tiny” at home. His older brother Camrhon was a 320-pound offensive lineman at Texas from 2012-14 and another brother, Chris, is a 300-pound lineman at Kansas. (“I don’t know if I got shorted nourishing meals. They probably stole some food off my plate,” he surmised).

Hughes, though, has made a sizable impact on the field.

He has recorded 109 career tackles and blocked a field goal in his first three seasons. Two years ago he ranked second on the team with 5.5 sacks. His 3.5 sacks in 2016 were bettered by only two other Longhorns.

“Getting here my freshman year and getting put up against him, I almost didn’t even touch him because he just ran by me,” recalled junior left tackle Connor Williams. “I remember looking at (Kent Perkins), because KP was one of the older ones, and talking to him; he was, like, ‘He’s fast, bro, you’ve got to get back there.’ It was an eye-opening experience.”

Defensive back P.J. Locke III described Hughes as a “guy you can always talk to” who has used his work ethic to command respect. Hughes will be a B-backer in Todd Orlando’s defense and wants to be an on-field leader for a unit that’s coming off two of the three worst statistical seasons in school history. The Longhorns gave up 31.5 points a game in 2016 and 30.3 a game in 2015.

“On the field, I expect my game to take another huge leap in the game basically because my body feels a whole lot better,” he said. “Mentally and physically, my coach demands a whole lot out of us each and every day. I can’t wait to get on the field.”