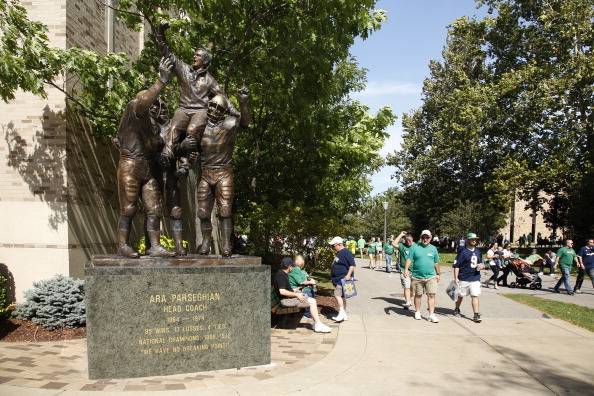 Few coaches in Texas history have a richer bowl history facing the Longhorns than College Football Hall of Famer Ara Parseghian, who died Wednesday at the age of 94 in Indiana.

Known in pop culture as the man who gave “Rudy” a chance, Parseghian was one of the top coaches in college football during the 1960s and 1970s. When he was hired at Notre Dame before the 1964 season he became the first non-Catholic coach of the Fighting Irish since Knute Rockne. He also broke a long tradition of only Notre Dame alums leading the program, a tradition that also started with Rockne.

Parseghian’s Notre Dame lore has deep University of Texas ties as it was Texas that gave him one of his most painful defeats and one of his signature moments.

Notre Dame didn’t really go to bowl games before 1969. The last bowl game Notre Dame played in before then was in 1925. But with a chance to play the No. 1 team in the nation, Notre Dame accepted an invitation to to the 1970 Cotton Bowl to play Texas and coach Darrell Royal.

That game is one of the biggest wins in Texas football history and one of the more crushing loses in Notre Dame history. The Irish led 17-14 in the final minutes, but Texas took the lead with 1:08 remaining to secure Royal’s second national championship at Texas.

The following year Texas was just as good and Notre Dame had improved. Texas entered the Cotton Bowl undefeated and on a 30 game winning streak. Notre Dame meanwhile was 9-1 and coming off a painful 38-28 loss to USC to end the season.

Ranked No. 6 and facing the already crowned national champion Texas, Notre Dame recovered from an early 3-0 deficit to score 21 unanswered points and a take a 24-11 lead into halftime. Neither team scored in the second half and Notre Dame avenged the loss from a year earlier.

The scene after the game, of Notre Dame players hoisting Parseghian on their shoulders, is now a statue outside Notre Dame Stadium in South Bend, Indiana.

“Coming to Texas and playing a team with an undefeated season and eventually a 30-game win streak [in 1971] was really a memorable thing,” Parseghian told the Dallas Morning News in 2007.

Notre Dame and Texas would play for a third time with a national championship on the line in January 1978, and the Irish would take that game also, 38-10.

FROM THE ARCHIVES (Dec. 13, 1991): Mackovic takes over UT football program

Bohls: How is Tom Herman fighting entitlement in the football program?