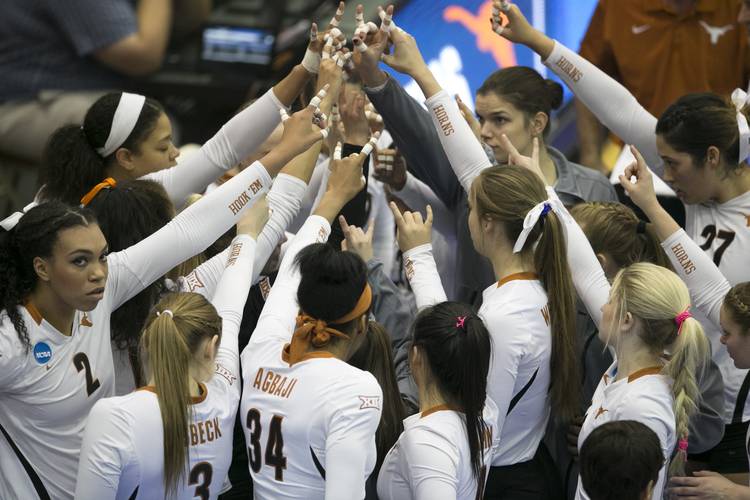 UT volleyball players huddle during a timeout in the first set against BYU at the regional round of the 2016 Division I Women's Volleyball Championship at Gregory Gym on Friday December 9, 2016. JAY JANNER / AMERICAN-STATESMAN

In the eyes of the Big 12, Texas will open this volleyball season in a familiar place.

The Big 12 announced on Thursday that Texas was the No. 1 team in its preseason volleyball poll. This marked the seventh straight season that UT has topped the conference’s preseason poll. Texas went onto win conference titles in five of the previous six years.

The Big 12’s preseason poll is voted on by the conference’s coaches. Texas received six of the nine first-place votes.

Kansas, which is the conference’s reigning champion, earned the poll’s second-place designation. Coaches are not allowed to vote for their own team, so Texas’ Jerritt Elliott gave the Jayhawks one of their three first-place votes.

Texas went 27-5 in 2016, and the Longhorns’ season ended with a loss to Stanford in the NCAA’s championship match. Despite the loss of setter Chloe Collins, UT retains a loaded roster. AVCA All-Americans Ebony Nwanebu, Chiaka Ogbogu and Micaya White were placed on the Big 12’s preseason volleyball team earlier this week, and Texas’ 2017 recruiting class was rated as the nation’s best. (Outside hitter Lexi Sun was also voted as the Big 12’s preseason freshman of the year).

Texas will travel to Florida on Aug. 25 for its first match of the season. UT opens Big 12 play at West Virginia on Sept. 23.

Texas set to travel to Mexico during 2018 softball season