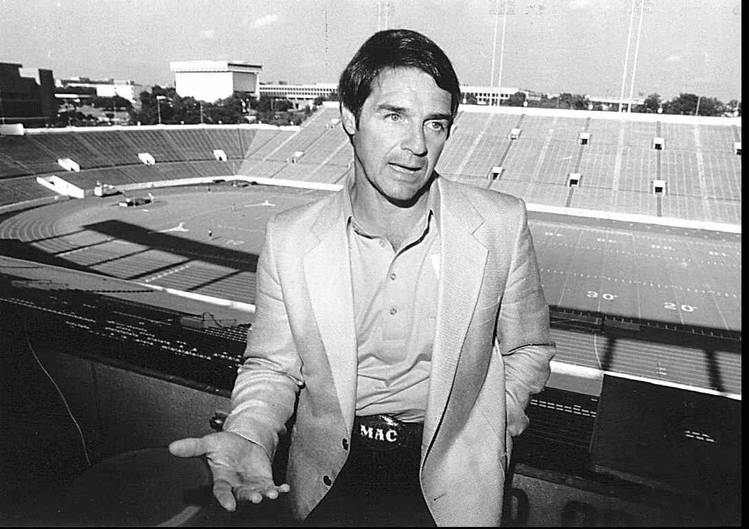 David McWilliams is one of three Texas football players to become head coach of the program, and he’s one of the most accomplished. McWilliams was on the 1963 national title team– a captain — and returned to Texas as coach during the best years of Texas football. As a player, McWilliams won three conference titles. He left Austin to become a high school coach, first as an assistant than as head coach of Abilene High in 1966. He went 21-7-2 in four seasons and left to join Darrell Royal’s staff on the reigning national championship Texas team. The Longhorns would win the title in 1970.

When Royal retired in 1976, McWilliams stayed on staff under Fred Akers, spending a total of 15 years as a Texas assistant.

Throughout the Akers era, the coach was dogged by an invisible divide between him and Royal. Akers was chosen against Royal’s wishes to replace him. When Akers was fired in 1986, Texas looked to Lubbock and first-year Texas Tech coach McWilliams to replace Akers.  It was a move that some saw as a way to appease the Royal loyalist.

But it made football sense too. McWilliams was only away from the Texas program for one season, and in that one year he led Texas Tech to one of its best seasons in decades.

McWilliams was a defensive-minded coach, the first coach with that background in decades. Royal, a former Oklahoma quarterback, and Akers, an offensive coordinator at heart, Texas now led by a man who helped Akers’ defensive coordinator Leon Fuller build some of the best defenses in Texas history.

But for all the changes the coaching staff made, McWilliams (a lot like new Texas coach Tom Herman) was still inheriting a team that went 5-6 the year before, ended the season on a two-game losing streak without a bowl appearance and went 0-4 against ranked teams.

The 1987 team did have talent though (also like Herman).

Junior running back Eric Metcalf was still on the roster. Linebacker Britt Hager was still collecting tackles at an incredible rate. Gabriel Johnson and Metcalf gave the Longhorns targets in the passing game and guard Paul Jetton and defensive back John Hagy would go on to be drafted in the spring of 1988.

The junior single handily dragged Texas to that record, and for his efforts he was named the Southwest Conference Player of the Year in 1987 and a second team All-American. Metcalf rushed for 1,161 yards and 10 touchdowns. He caught 33 passes for 234 yards. He had 324 punt return yards with one touchdown. He averaged 18.4 yards per kick return. In total, he had 1,921 all-purpose yards, an average of 174.6 yards per game.

McWilliams said Metcalf was the best player he ever coached: “Eric could play any skill position you wanted. He could return punts, return kicks. He could have been a defensive back. He could pass-block. He was tough.”

Hager’s season shouldn’t go unnoticed either. He recorded 187 tackles, at the time the most in a single season for Texas, and record he would break the following season. Hager is still the all-time leader in tackles at Texas.

And one of the greatest games in Longhorn linebacking history came on Oct. 31, 1987. Hager recorded 27 tackles against Texas Tech that day as the Longhorns beat the Red Raiders 41-27 in Austin. Those 27 tackles still stand as the single-game record for tackles.

“Britt Hager was one of the better linebackers. He could take a center straight on and whip ‘em and then go to the sideline to make a tackle,” McWilliams said.

McWilliams’ coaching career at Texas began with back-to-back losses to Auburn and BYU. Good thing Herman gets to avoid BYU, because the Cougars are 2-0 against first year Texas coaches, having beaten Charlie Strong in 2014.

McWilliams picked up back-to-back wins to even the record, but were crushed by No. 1 Oklahoma in Dallas. The following weekend Texas played No. 15 Arkansas, McWilliams was able to pick up its biggest win of the season: a 16-14 victory over Arkansas in Little Rock.

Trailing the Razorbacks 14-10 with four seconds left, quarterback Bret Stafford hit Tony Jones with an 18-yard touchdown pass with no time left to win the game:

Here’s what McWilliams said of the play:

“I saw Tony get the ball and get hit and turned around by the safety. I’m watching the back judge, and he’s not signaling touchdown. Everybody on our sideline is jumping up and down, screaming and hollering. The line judge runs in and signals touchdown. Two plays before, we had Eric Metcalf wide open, but Bret (Stafford) didn’t see him. On the last play, it was Bret who called the play. He and (offensive coordinator John) Mize and I were discussing it, and I asked Bret, ‘What do you want to do?’ Bret said he wanted to sprint to the right and take the safety out of the play, and he’d throw the ball to Tony on a post route. I said, ‘Run it.’”

Texas went 3-1 over the next month and ended the season with a 20-13 loss to Texas A&M on the road. The Aggies won the conference with a 10-2 record and Texas tied with Arkansas with a 5-2 conference record. Texas was invited to the Bluebonnet Bowl to play 8-3 Pittsburgh, ranked No. 19 at the time.

Texas held off a late Pittsburgh rally to win its first bowl game since 1981.

Spoiler: the McWilliams era wasn’t filled with a lot of wins, but the 1987 season was, kind of, a positive start for his program. But it was a far cry from 10 years earlier when Akers was a win away from claiming a national title in his first year.