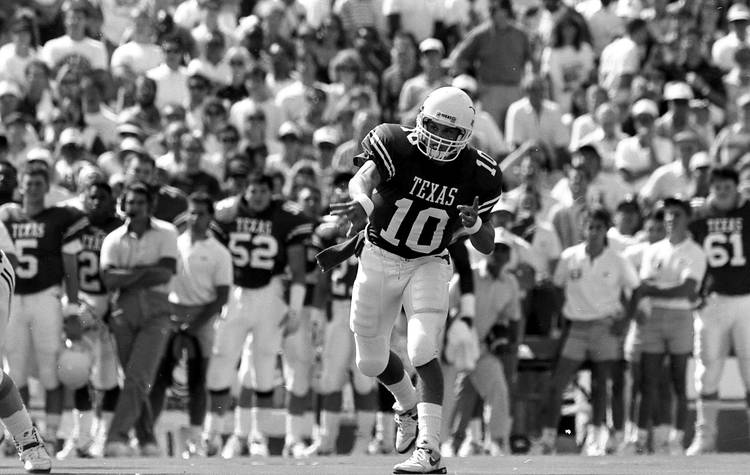 Peter Gardere lead the Longhorns to a 1990 season-opening win at Penn State. (University of Texas at Austin).

The last time Texas suffered consecutive losing seasons before 1989 was in 1937 and 1938. Ed Price followed a 5-5 season with a 1-9 year in 1956, but that was as close at it got before coach David McWilliams’ third season.

Texas began the 1989 season with a 27-6 loss to Colorado, a team that went 11-1 and won the Big 8 title. In the third game, a match up against powerhouse Penn State, a game that featured a newly installed fancy four-color animated scoreboard in the north end of the Texas Memorial Stadium, Texas led 12-9 in the fourth quarter before the Nittany Lions scored a touchdown with 6:52 left. Texas never recovered and lost 16-12.

The next week a quarterback change was made. Out was Mark Murdock and in was red-shirt freshman Peter Gardere.

Gardere is the often forgotten quarterback in Longhorn lore, but he left campus holding 17 passing records. Given that this is Texas it probably wasn’t that hard to set a bunch of passing records (just look at the passing attacks, or lack thereof, of the Darrell Royal era), but some of his records were in place for a while. Gardere’s records for most games, most completions, most attempts and fastest to 2,000 career passing yards were all records that Major Applewhite would break about 10 years later. Colt McCoy broke Gardere’s most starts for a quarterback record in 2009.

Gardere’s first start, first of 41, against Rice was memorable. Texas trailed 17-14 at halftime and entered the fourth quarter down 30-17. Gardere led a 14-0 fourth quarter to win the game 31-30. Gardere scored the game-winning touchdown with 4:05 left on a 4-yard run. He finished with 192 passing yards. Meanwhile running back Adrian Walker added 151 rushing yards.

This set up the following week, where Texas entered its matchup with Oklahoma a .500 team facing the No. 15 team in the country.

Here’s the thing about David McWilliams: he lost a lot of games at Texas, but he figured out how to beat Oklahoma. The Longhorns had losing seasons in 1989, a great year in 1990 and a losing season in 1991, but they went 3-0 against ranked Oklahoma squads, teams that twice were ranked in the top 10. With Gardere as the quarterback, Texas went 4-0  against the Sooners.

In 1989, Oklahoma took a 24-20 lead with 3:42 left in the game. Gardere and Texas took over following the score and the Longhorns capped a 66-yard, 7 play drive with a 25-yard touchdown from Gardere to Johnny Walker with 1:39 left.

Since taking over at quarterback, Gardere was 3-0 with two wins over ranked teams which both came away from Austin.

Texas moved back into the rankings for the first time since the 1988 preseason poll, landing at No. 22. That ranking didn’t last long. Texas lost at home to Texas Tech then went to Houston.

The game against No. 15 Houston is one of the uglier ones of the season. The Cougars blasted the Longhorns 47-9. Texas actually led 3-0 in the game before being outscored, well, you do the math.

In the end, after beating Arkansas, Texas finished the season on a 1-4 tumble. The Longhorns lost at home to Baylor, who was 5-6 that season, 50-7 at home. A 43-point loss at home is one of the worst in program history.

The next week Texas faced a new-look Texas A&M squad.

The Aggies beat Texas 21-10 to extend their winning streak over the Longhorns to six games, the longest such streak for Texas A&M. For the second year in a row, Texas would not be going to a bowl game.

The seat was hot for McWilliams but lucky for him one of the most talented rosters to play at Texas was about shock the nation in 1990.