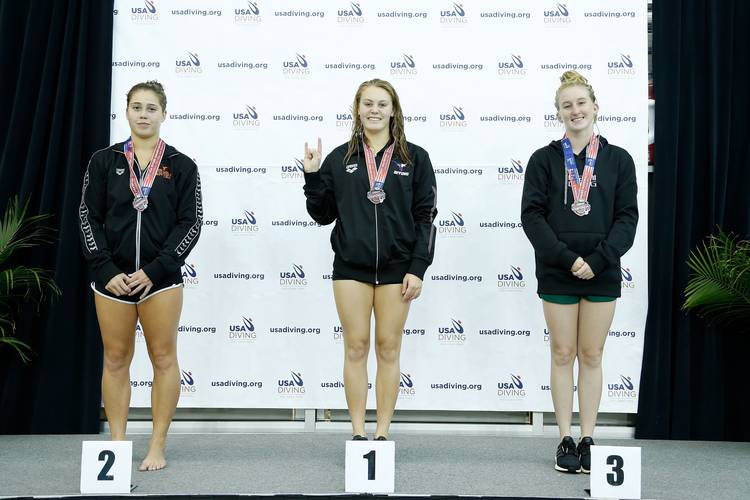 Maria Coburn of Longhorn Aquatics, Alison Gibson of Longhorn Aquatics and Wallace Layland of the University of Miami stand on the podium after placing second, first, and third, respectively, in the Senior Women's 1m Springboard Final during the 2017 USA Diving Summer National Championships on August 8, 2017 in Columbus, Ohio. (Photo by Kirk Irwin/Getty Images)

Gibson, who also has an NCAA title in the event, qualified at the top of the standings Tuesday morning for the one-meter finals. She won the title with 271.80 points.

The UT sophomore was in third place heading into the final round and scored 54.60 points with a front one-and-a-half somersault with two twists. The result completed a sweep for the UT men and women in the event.

Earlier in the day, Texas sophomore Campbell, scored 366.90 points to take the men’s title in the one-meter event. The freshman All-American at Texas had a wire-to-wire win. He took the event by almost 30 points.

Campbell is a 13-time junior national champion and this is his first title at the senior level of the USA Diving National Championships. He won the boys’ 16-18 one-meter championship two years in a row. He helped Texas take its third straight NCAA Championship in March with an eighth place finish in the three-meter event.

In March, at 17-years-old, Gibson won the NCAA title in her first ever appearance at the NCAA Championships. She took 25th place at the FINA World Championships in July.

Two other Longhorns, Murphy Bromberg and Meghan O’Brien, competed in Tuesday’s women’s event alongside Gibson. Bromberg took 10th place in the preliminary round. She scored 223.95 points while O’Brien finished in 11th with 223.30 points.