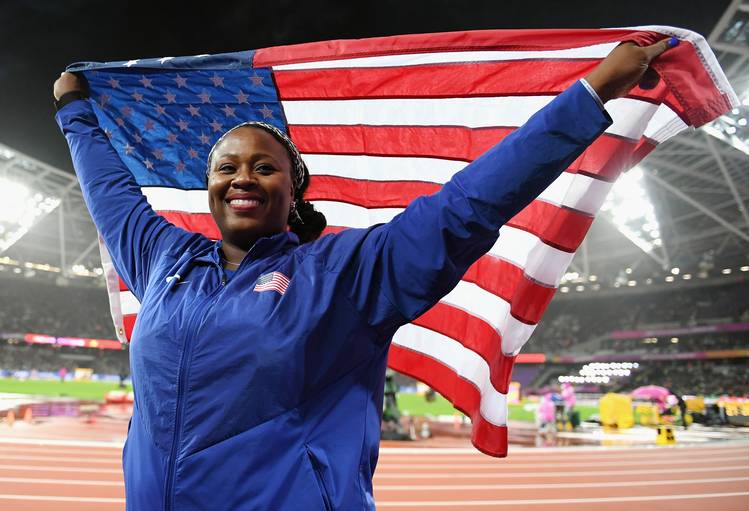 Michelle Carter of the United States celebrates after winning bronze in the Women's Shot Put final during day six of the 16th IAAF World Athletics Championships London 2017 at The London Stadium on August 9, 2017 in London, United Kingdom. (Photo by Matthias Hangst/Getty Images)

Michelle Carter had to deal with rain and tough competition as she took home a bronze medal Wednesday at the IAAF World Championships in London. Her best throw in the shot put went 62 feet, 9 1/2 inches and was good for the first medal won by a current or former Longhorn at the event.

Carter held second place heading into the final round, but Anita Marton of Hungary moved past her. Carter’s final throw came up short, allowing China’s Lijiao Gong to take gold, followed by Marton with silver.

Carter won Olympic gold in Rio de Janeiro in 2016 with a throw of 67 feet, 10 1/4 inches on her sixth and final attempt. She made history as she broke the American record and became the first female American to win gold. She also became the  first U.S. athlete to medal in the same event as her father. Instead of earning a silver medal like Michael Carter did in the 1984 Olympics in Los Angeles, Michelle took gold.

Texas on top: Longhorns to open the volleyball season as nation’s No. 1 team