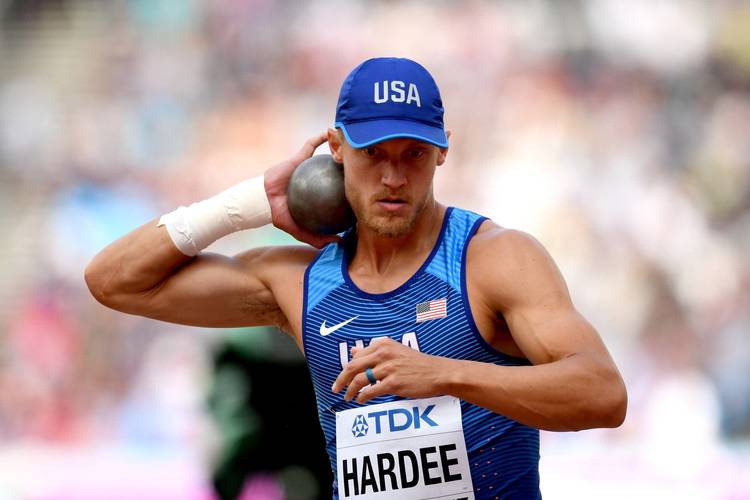 Trey Hardee of the United States competes in the Men's Decathlon Shot Put during day eight of the 16th IAAF World Athletics Championships London 2017 at The London Stadium on August 11, 2017 in London, United Kingdom. (Photo by Matthias Hangst/Getty Images)

Hardee recorded three season’s bests and scored 4,313 points in an attempt to take his third world title. He won the gold medal in 2009 and 2011.

The former NCAA record holder and Olympic silver medalist ran a 48.78, his season’s best, in the 400 meters to close out the day.

Hardee started the day with a fifth-place finish in the 100 meters with a time of 10.75. He then posted his first season’s best of the day in the long jump. Hardee jumped 24-6 1/2 to finish in sixth. He tied his best mark in the high jump as well.

Hardee’s performance in the shot put briefly moved him from sixth to third place. He posted a mark of 49 feet, 9 inches in the event, where he finished fifth.

Kevin Mayer of France leads all competitors with 4,478 points with Kai Kazmirek of Germany in second with 4,421 points. Hardee trails third place, Rico Freimuth of Germany, by 48 points.

In other action at the World Championships, Chantel Malone took seventh place for the British Virgin Islands in the women’s long jump. She posted a mark of 21-6 3/4 in Friday’s finals for the best finish of her career.

The former Longhorn and six time All-American posted a mark of 21-4 3/4 in the qualifying round on Wednesday.

Rushelle Burton, a sophomore at Texas, finished the 100-meter hurdles in 12th overall. She ran a 12.94 in both the prelims and semifinals as she fell short of qualifying for the finals.

Burton, who made her major championships debut for Jamaica, was the second-youngest runner in the field of 40. She’s the reigning Big 12 champion in the event.