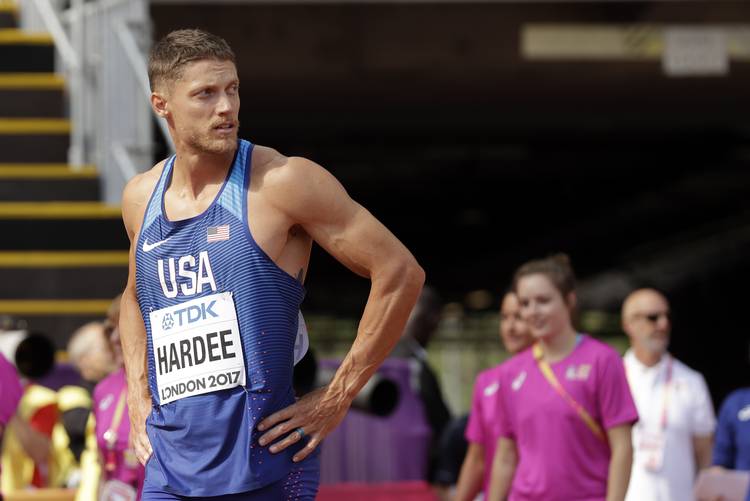 United States' Trey Hardee looks back to the track after he fell in the 110-meter hurdles in the decathlon during the World Athletics Championships in London Saturday, Aug. 12, 2017. (AP Photo/Matt Dunham)

“This is my last meet. This is it. I’m going to ride off into the sunset,” Hardee told Lewis Johnson of NBC Sports. “I’m ready to start life.”

“It just feels right. I worked hard. Tried to do it the right way,” he said. “Ready to do the next thing.”

Former Longhorn Morolake Akinosun and Team USA won gold in the women’s 400-meter relay at the IAAF World Championships with a world-leading time of 41.82 seconds on Saturday.

Akinosun, a 2016 gold medalist for Team USA, was a 13-time Big 12 champion at Texas and the 2016 Big 12 performer of the year. Her gold is the second medal won by a former Longhorn this year as Michelle Carter took bronze in the women’s shot put.

Chrisann Gordon, another Texas Ex, helped Jamaica advance to the 1600 relay final. The team finished its heat in 3:23.64 and will go for the title on Sunday.