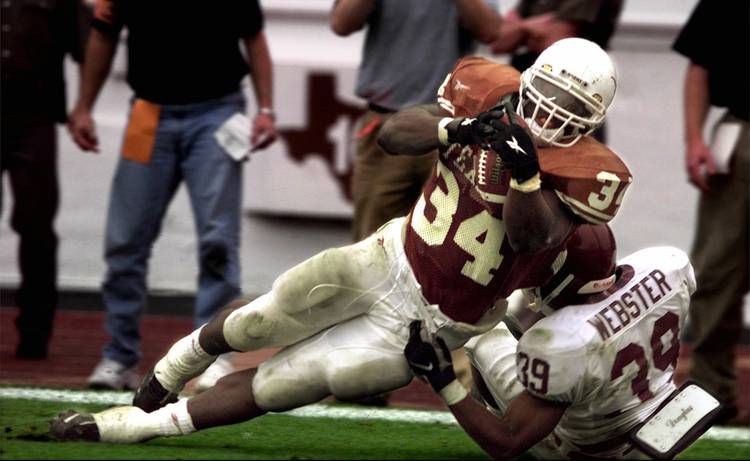 Mack Brown’s first head coaching job was in 1983, when he led Appalachian State to a 6-5 record. He left after a season to return to Oklahoma where he became the offensive coordinator. In 1985, he became the head coach at Tulane where he coached until taking the North Carolina job in 1988.

He arrived at Texas after the Longhorns went from Big 12 Champions to 4-7 overall and 2-6 in the league. But there was plenty of talent.

And that’s why we start talking about the 1998 team with two words: Ricky Williams.

Williams entered the 1998 season with 4,155 career yards. To break Pittsburgh great Tony Dorsett’s all-time NCAA rushing record, Williams would have to rush for close to 2,000 yards in 1998.  He needed only a few hundred yards to surpass Earl Campbell for the program’s all-time record.

But how would the offense work with a new head coach and new offensive coordinator, Greg Davis?

Well, it worked out really well.

Running behind blockers Octavio Bishop, Roger Roesler, Russel Gaskamp, Ben Adams and Jay Humphrey, Williams rushed for 2,124 yards and 27 touchdowns. He broke Dorsett’s (who was at the game) record against No. 6 Texas A&M on this play:

“He’s the greatest running back I’ve ever been around, ” Humphrey told Statesman columnist Kirk Bohls. “I even started a rumor that the line would all like one of Ricky’s dreadlocks dipped in bronze.”

“I wasn’t nervous until I walked into the Heisman room, and then I was just overwhelmed, ” Williams told the Statesman. “When it came time for the announcement, my heart was beating so fast, and I was so nervous. It was a relief to finally hear my name called and accept the trophy.”

Bohls wrote a letter to Williams that night, saying: “I’ve personally been lucky enough to have witnessed all 48 of your collegiate games.”

Austin held a parade in January of 1999 for Ricky Williams. Graduate assistant coach Tom Herman sat right next to him:

He became one of the most popular names for the Cleveland Browns to consider as the No. 1 pick in the NFL Draft in the spring of 1999. But instead, the Browns took Kentucky quarterback Tim Couch No.1. Then the Eagles took Syracuse quarterback Donovan McNabb No. 2. The Cincinnati Bengals went with Akili Smith No. 3. The Colts held the No. 4 pick and unlike the first three teams had a quarterback (future Hall of Famer Peyton Manning) on the roster. They needed a running back.

But they took Miami running back Edgerrin James over Williams. The Saints, who had traded their entire draft to move to No. 5, selected Williams.

A terrible rookie contract and not meeting the lofty expectations doomed Williams’ stint in New Orleans and he eventually moved to Miami, where he became of one the league’s best running backs before he retired, unexpectedly, before the 2004 season. He returned two years later with the Dolphins and finished his career a Baltimore Raven.

Texas was unranked to start the season following a four-win 1997 campaign. Texas wouldn’t miss another preseason poll until 2011, or 12-straight preseason polls.

After cruising by New Mexico State 66-36, the Longhorns stumbled against No. 6 UCLA in Los Angeles 49-31 and were dismantled by No. 5 Kansas State on the road 48-7.

Before the Kansas State game, Brown made one of his first big-time coaching decisions when he replaced senior starting quarterback Richard Walton with redshirt freshman quarterback Major Applewhite. He went 16-for-37 and passed for 239 yards with one touchdown and two interceptions that day. But it started one of the best and most memorable Longhorn quarterback careers ever.

Following that loss to the Wildcats, Texas reeled off six-straight wins, including a 34-3 beat down of Oklahoma, the last Oklahoma game Brown would coach against a Sooner team not coached by Bob Stoops.

But the biggest win of the six-game streak, and one that put Texas back in the AP top 25, was against No. 7 Nebraska.

Trailing 16-13,  Applewhite hit Wane McGarity with a two-yard touchdown pass to cap a 14-play, 85-yard drive with 2:47 left in the game. With Texas in the lead, future Heisman Trophy winner Eric Crouch couldn’t rally the Huskers back and Texas won its first game against a top-10 team since beating Nebraska in the Big 12 Championship Game in 1996.

The win was a watershed moment for Texas and Brown. After beating Nebraska, Bohls wrote that Brown’s program was ahead of schedule: “Mack Brown would have built Rome in half a day. And painted the Sistine Chapel over lunch.”

Texas followed that performance with a dramatic win over Oklahoma State the next week, when Kris Stockton broke a 34-34 tie with three seconds left in the game to give Texas its sixth-straight victory.

The Cowboys called three straight timeouts to try and freeze Stockton before the kick, which is when Mack Brown went all Mack Brown on his kicker. From the story:

During the second of the breaks, Coach Mack Brown put an arm around his kicker and confided in him. “He said he was jealous because I had a chance to win the ballgame, ” Stockton recalled.

Texas lost the next week to Texas Tech 42-35 and entered the last game of the season against No. 6 Texas A&M unranked. With Ricky Williams yards away from breaking the record, a raucous home crowd and Brown’s first foray into the Texas-Texas A&M matchup — there was a lot of pressure.

Williams broke the record early in the game on a 60-yard touchdown run.

The Longhorns got the ball back and went 70 yards in 11 plays to set up a 24-yard field for Stockton.

Stockton had already missed two kicks in the game, and now the sophomore was trying to cap-off a game that, because of Williams, would be in the Longhorns’ record books forever.

He hit it, telling the Statesman:  “I knew I had to redeem myself. “I wasn’t unsure of my ability, but it didn’t help that I missed my last two attempts. Coach (Mack) Brown just told me to relax. I knew it was a short kick and I didn’t have to kick it hard. I just thought, `Nice and easy.’ I knew it was good as soon as I hit it. I hit it solid, perfect.”

It gave us this epic photo:

Texas finished Brown’s first regular season with an 8-3 record with wins over two top-10 teams in the final month of the season.

Texas then accepted an invite to the Cotton Bowl for the first time since 1990.

Mississippi State never had a chance. Texas led 14-3 at halftime and outscored the Bulldogs 24-0 in the third quarter en route to a 38-11 win.   In his final game ever in Burnt Orange, Williams rushed for 203 yards and two touchdowns.

Brown’s first season was a massive success and would help set up one of the most successful coaching tenures in college football history.