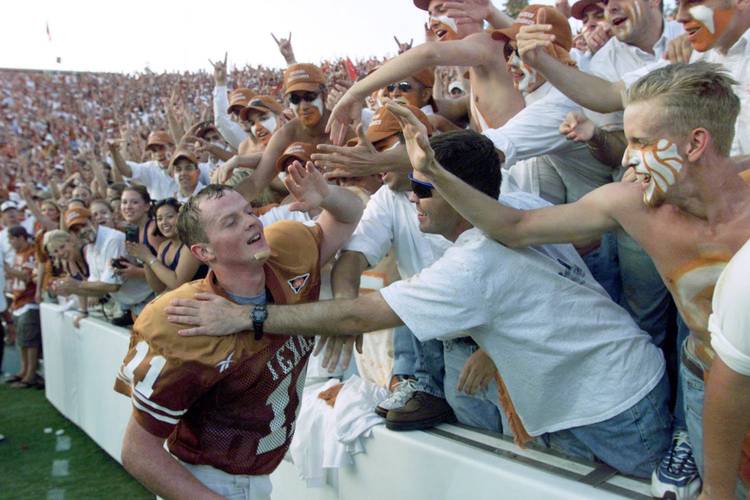 10/9/99 Ralph Barrera/AA-S; Texas' QB Major Applewhite celebrates with the fans in the stands after Texas' come from behind victory over rival Oklahoma in their Cotton Bowl matchup Saturday October 9, 1999 in Dallas, TX. (Wangrin story)

With Ricky Williams moving to the NFL, the Longhorns and second-year coach Mack Brown began a new era at Texas.

It started with a heck of a recruiting class.

The deep, talented roster went 9-5 in 1999, on paper a great season, but this squad had a bumpier time than Brown’s first team despite winning more games.

Hodges Mitchell stepped into Ricky Williams’ role as the lead back and rushed for 1,343 yards and nine touchdowns. Major Applewhite threw for 3,357 yards (then a team record) and 21 touchdowns and nine interceptions.

Kwame Cavil set a then Longhorn record with 100 catches, shattering the previous record set the year before by Wane McGarity, who had 58 catches. Cavil had 1,188 yards and six touchdowns in 1999.

Ryan Nunez would have threatened McGarity’s record also– he caught 56 passes for 600 yards.

The Darrell Royal offensive philosophy was never coming back to Texas.

The defense had improved from Brown’s first season, and the numbers showed.

Texas lost its first game of the season 23-20 to North Carolina State, then reeled off four straight wins.

Brown fell to 0-2 against Kansas State to snap that run, falling 35-17. This would be a trend for Brown’s teams, who struggled mightily to solve the Bill Snyder conundrum.

The Longhorns bounced back to win five more games in a row, including a 38-28 win over Oklahoma and first-year coach Bob Stoops. The native of Ohio had been hired away from Florida, where he had been the defensive coordinator, in the offseason. “Big Game Bob” would beat Texas many times with the Sooners, but his first crack at the Longhorns would belong to Brown.

The Sooners opened a 17-3 lead on Texas after the first quarter, but Texas outscored Oklahoma 28-11 in the second and third quarters and went on to win 38-28. Applewhite finished with 328 yards, while Mitchell rushed for 204 yards.

That win was followed by a third straight victory over a top-10 ranked Nebraska team. Texas rallied from 10 points down to take the lead with 5:51 left in the game, 24-20, and kept Eric Crouch and the Huskers from scoring again to clinch the win.

Rising to No. 7 in the AP pol l– the highest ranking since 1996 –Texas entered its match up with No. 24 Texas A&M having already booked a spot to the 1999 Big 12 Championship Game.

The Longhorns lost 20-16 as the Aggies scored two second half touchdowns to take the lead. Ja’Mar Toombs rushed for 126 yards on a whooping 37 carries.

The next week Texas faced Nebraska in a rematch. This time the Huskers made sure they won. They led the Longhorns 22-0 before Ahmad Brooks scooped a fumble and ran it for a touchdown with 13:26 left to play. The Longhorns couldn’t convert for two and never scored again, losing 22-6.

Texas accepted an invite to the Cotton Bowl where the Longhorns would play longtime rival Arkansas.

It would be the first game against the Razorbacks since Arkansas left for the Southeastern Conference following the 1991 season.

In the end, Texas finished 9-5 for the year, but lost three straight games to end the season.

Were they changes needed? Mack Brown was safe, but despite a historic passing season at Texas, would a quarterback change be needed?

Next on Daily Longhorn: The Major Applewhite-Chris Simms debate.