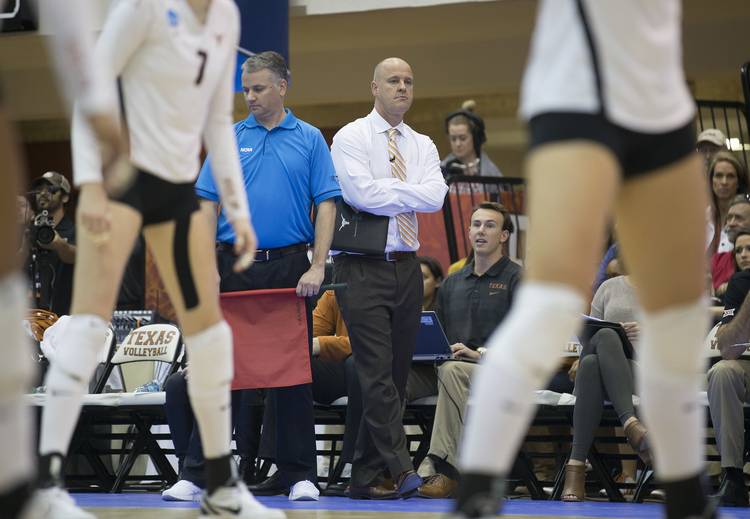 Texas opens its volleyball season next week with matches against Florida and Oregon, the No. 12- and No. 18-ranked teams in the AVCA’s preseason poll.

First, though, the top-ranked Longhorns have to battle themselves.

On Saturday, Texas will host an intra-squad scrimmage at Gregory Gym. The scrimmage, which begins at 11 a.m., is open to the public and will give UT its first opportunity to showcase its loaded roster.

At Texas’ disposal this year are three AVCA All-Americans — middle blocker Chiaka Ogbogu and outside hitters Micaya White and Ebony Nwanebu. Juniors Morgan Johnson and Yaazie Bedart-Ghani have each earned some sort of Big 12 honors during their time at Texas, and senior libero Cat McCoy is on track to become UT’s career digs leader. Freshmen Lexi Sun, Brionne Butler and Ashley Shook were the first-, second- and sixth-rated recruits in the nation, and sophomores Autumn Rounsaville and Orie Agbaji closed out last season with solid performances in the NCAA championship match.

“I think we have similarities with the Golden State Warriors,” Texas coach Jerritt Elliott said last week. “A very deep bench, a lot of different people can get the ball and score for us.”

Yes, the comparison to the Warriors are lofty. The Longhorns do, however, have ties to the NBA champions.

Elliott and Golden State head coach Steve Kerr both attended Palisades High School in the Los Angeles area. Elliott, 49, is two years younger than Kerr, but he considers him a family friend. There also is that NBA Finals MVP who attended Texas; Elliott is hoping that Kevin Durant can Skype in a pep talk this season.

Like a Golden State team that has reached three straight NBA Finals, Texas has made every Final Four since 2011. The Longhorns, however, have only one title to show for all those Final Fours. That came in 2012; Texas has been the NCAA’s runner-up in two straight seasons. This year, the Longhorns are hunting for gold.

“We’ve worked so hard for it, and I feel like this year we have all the pieces,” McCoy said. “I don’t want to look too far ahead and hype it up more than it needs to be, but obviously that is the main goal. It’s going to take a lot, the process will be very tiring.”

Scrimmage sensation: This weekend the soccer team hosts Rice and Western Kentucky, Texas’ first matches of the season. Last Friday UT tuned up for those matches with a 2-0 win over Incarnate Word. In the exhibition match, the Longhorns got goals from sophomore Cyera Hintzen and junior Katie Glenn.

Glenn is a few months removed from scoring a team-high six goals during UT’s spring scrimmages, and four of those scores were tallied against Houston. Glenn attended nearby Rouse High; she was the American-Statesman’s 2014 Central Texas player of the year after scoring 43 goals her senior season. She was fourth on the team in scoring last year as a sophomore.

As a junior, Glenn is among the elder statesmen on a roster that features only three seniors. Texas, which went 8-9-1 last year and missed the Big 12’s postseason tournament, is ranked eighth in the Big 12’s preseason poll. Texas returners scored 24 of last year’s 28 goals, and sophomore forward Mikayla Flores is back from a knee injury.

“We’re just ready to get out there and show everybody how Texas Soccer really plays,” said Hintzen, who was voted onto the conference’s preseason team. “Considering last year didn’t go the way we wanted, so we’re really hungry and ready.”