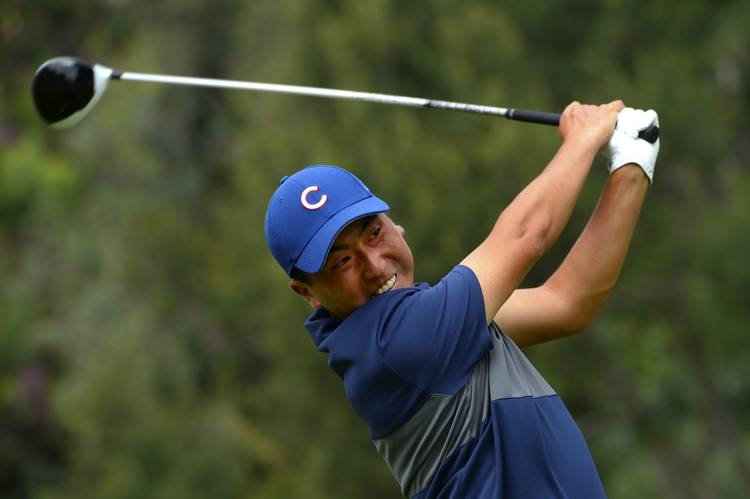 Doug Ghim makes a tee shot on the 17th hole during the first round of the USGA U.S. Amateur Championship 36 hole final on August 20, 2017 at the The Riviera Country Club in Pacific Palisades, California. (Photo by Robert Laberge/Getty Images)

LOS ANGELES — Doc Redman rallied from two holes down with two to play and won the U.S. Amateur on Sunday, beating Doug Ghim on the first extra hole.
Ghim was 2 up heading to the 35th hole of the two-round final at Riviera Country Club, but Redman made a stunning 60-foot eagle putt to win the hole with the tournament on the line. Redman then holed a short, tricky birdie putt on the 18th to force overtime.
Ghim put his tee shot in the rough and his second shot in the sand on the extra hole — the 10th. After Ghim’s bogey putt missed, he conceded the hole and the title to Redman.
“It’s awesome,” Redman said. “All the hard work paid off, obviously.”
Redman and Ghim, a senior at the University of Texas, will be teammates in Walker Cup competition in three weeks at Los Angeles Country Club, where a 10-man team of American amateurs will face a team from Britain and Ireland.
The 62nd-seeded Redman is a 19-year-old sophomore at Clemson, and he followed a thoroughly improbable route to become the second Tiger to raise the Havemeyer Trophy after Chris Patton in 1989. He followed up a solid freshman year at Clemson by reaching the final of the Western Amateur, but gave little suggestion he was ready to make history at Riviera.
Redman became the second-lowest seed to win the title since 1985. He is the first champion to advance through the playoff to match play since Steven Fox — the lowest seed ever to win the Amateur at No. 63 — did it in 2012.
Ghim and Redman advanced comfortably through match play during the week on the famed course in Pacific Palisades. When they began the final under cloudy coastal conditions Sunday morning, they were practically even for the first 30 holes, with neither player taking a lead larger than 2 up.
Redman was 1 up with eight holes left in regulation, but Ghim won the 11th when Redman missed a short putt. Ghim took the lead on the 13th when Redman struggled to a bogey, and Ghim went 2 up when Redman missed a 4-foot par putt on the 16th.
The trophy appeared to be in Ghim’s hands — but it was snatched away on the final holes. Ghim, a Chicago-area native who wore a Cubs cap Sunday, also got to the verge of winning the 2014 U.S. Amateur Public Links title before blowing his lead on the final hole.
“We worked for everything,” Ghim said. “There wasn’t even that many holes won. Unfortunately I just didn’t come out on the winning end, but I have a lot to learn.”
Redman barely reached match play through a playoff, getting through 13 players for one of eight spots Wednesday morning after two days of stroke play. Doc — that’s his given name, not a nickname — didn’t stress about making the field, going to a Dodgers game on Tuesday night instead of staying glued to his phone.
Redman is an unlikely champion, but he showed a tenacious head-to-head competitive spirit in match play. He won his quarterfinal and semifinal matches 1 up, taking the 18th hole in each round.

What eclipse? Sun shining at Texas as volleyball season approaches