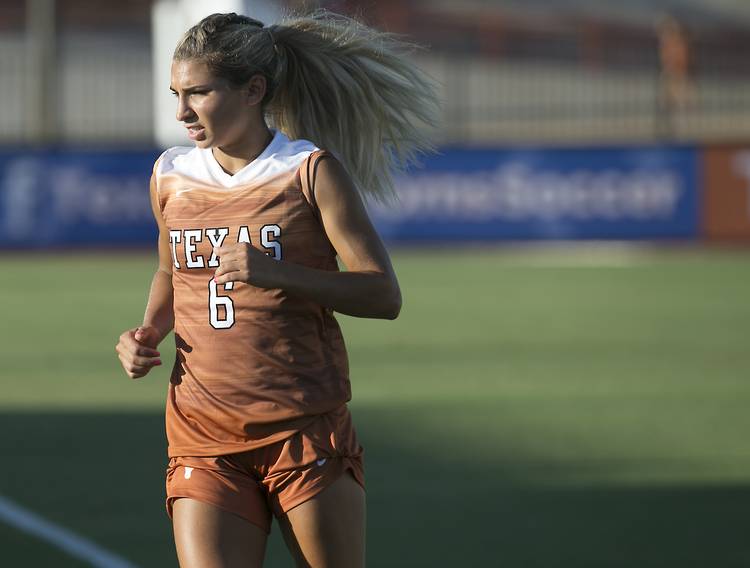 Amber Stearns and Emily Strouphauer scored the first goals of their Texas career to lead the Longhorns past Western Kentucky 2-0 at Myers Stadium on Sunday. Both goals came in the first half.

Stearns, a junior midfielder, scored during her two years at Boston College while Strouphauer, a freshman midfielder/forward, scored the first goal of her college career.

Junior midfielders Katie Glenn and Kayra Dollas were given the assists.

Texas (2-0) completely dominated the match, with 21 total shots to the Hilltoppers’ one. Texas had 14 in the first 45 minutes before Western Kentucky could take a shot of its own.

Stearns gave the Longhorns a 1-0 lead at the 18:22 mark on a header into the goal on a cross by Glenn.

With 2:45 remaining in the first half, Strouphauer scored from 28 yards to give Texas its final goal of the game.

“If you can get a goal in the first 10, a goal in the first 15-20 minutes, then ideally you score three a half,” said head coach Angela Kelly. “We’re pretty pleased with that. We had 21 shots, and we created more corners in the first half. Regardless, we’re excited to get on the board whenever it is, and we’ve really been concentrated on starting strong and I think the team is taking that to heart.”

With the win, Texas is off to a 2-0 start for the first time since 2010. The Longhorns are back in action Friday when they host Arkansas-Little Rock. Kickoff is scheduled for 7 p.m.