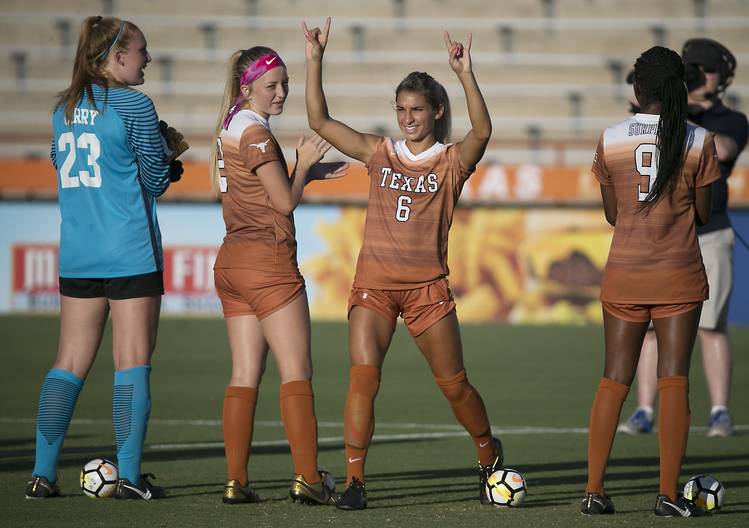 No, Texas forward Mikayla Flores wasn’t about to give up soccer.

Since July of 2014, Flores has torn the anterior cruciate ligament in both of her knees. She’s had three knee surgeries. Flores admitted last week that even her doctor advised her to give up the sport.

“I’ve loved this game since I was four,” said Flores, who is back in UT’s starting line-up. “I’m not going to stop now just because I’ve had a minor setback a couple of times.”

Flores is a pre-med major entering her fourth year on campus. On UT’s roster, though, she is a redshirt sophomore who is applying for a medical hardship.

Flores suffered an ACL injury in her right knee just before her arrival at Texas, so she was sidelined during her first year. Flores returned to become UT’s second-leading scorer in 2015, but she tore the ACL in her left knee 22 minutes into the first match of Texas’ 2016 season. Flores had an additional surgery on her right knee in the spring of 2016.

Flores said Texas’ coaching and training staff did a good job of handling her latest rehab. She even became a “mentor” in rehab to junior Alexa Adams, who also suffered a knee injury last season. (Adams still led UT with her five goals). Flores insists she now feels like she “didn’t have three surgeries in three years.”

“I’m just going to take the opportunity that I have, and I’m going to keep on playing,” Flores said. “I don’t even think about it on the field. I don’t play scared, I’m just here for my team and I’m here to win.”

Flores started in Texas’ 2-1 and 2-0 wins over Rice and Western Kentucky this past weekend, and she registered two shots on goal. Recruited out of La Verne, Calif., Flores has recorded three goals and four assists during her short — yet lengthy — stay in Austin.

Flores says she thinks she is back to being the player she once was. When later asked the same question, UT coach Angela Kelly added “and some.”

“When you sit out, it’s an interesting dynamic. Yes, it’s unfortunate, but you get an education in the game,” Kelly said. “She’s a tremendous leader by example. As she’s maturing and becoming more educated in the game, she’s becoming more of a leader on the field.”

New number: The UT volleyball team opens its season on Friday with a match at No. 12 Florida. Awaiting the following day at the Gainesville-hosted VERT Challenge will be No. 18 Oregon. Ranked No. 1 in the AVCA’s preseason poll, Texas tuned up for its road trip with a intrasquad scrimmage this past weekend.

Contributing 11 kills and six blocks in the four-set scrimmage was senior middle blocker Chiaka Ogbogu, who missed last season while dealing with academic issues. On Saturday, Ogbogu re-debuted while wearing a new number.

Ogbogu wore No. 11 during three All-American seasons from 2013-15. Freshman outside hitter Lexi Sun, however, inherited that number when she signed with Texas as the nation’s top-rated recruit. So Ogbogu has switched to No. 21.

Why No. 21? Ogbogu chose that number to honor Jacob Logan, her classmate at Coppell High. During their senior year, Logan drowned while cliff jumping into Possum Kingdom Lake. Logan was a receiver on Coppell’s football team, and he wore No. 21.

“In Coppell, all over, you’ll see 21 in the same font, in the blue lettering all over the town,” Ogbogu said earlier this month. “I feel like this season, it’s in memory of him… It’s just to commemorate him and how cool of an athlete he was. I just hope that this season, I somehow embody how he was on the field.”