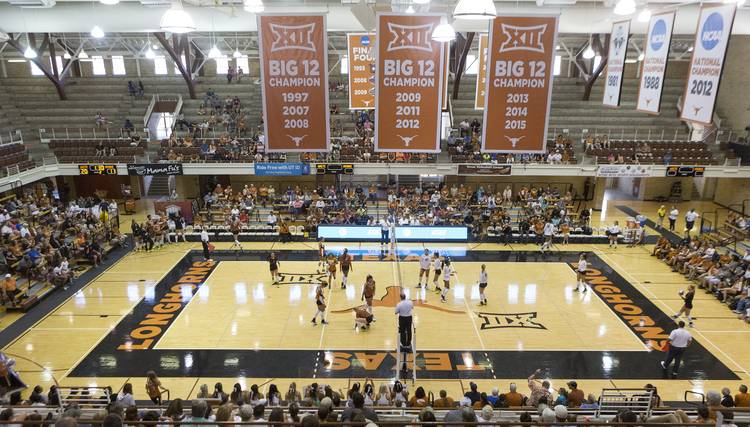 The win over the 18th-ranked Ducks improves the Longhorns to 1-1 on the young season. The No. 12 Florida Gators upset the Longhorns Friday night.

Freshman Lexi Sun once again led the team in kills with 14 with a .231 kill percentage. She also had eight digs and five blocks in the win.

Chiaka Ogbogu also had double-digit kills, with 10, on a .467 kill percentage. She added five blocks and three aces.

Ashley Shook led the Longhorns with 38 assists. She also tied teammate Cat McCoy for the lead in digs with 11.

Morgan Johnson was a force in the middle, blocking seven shots and adding six kills.

The Longhorns had a four-point lead early in the first set but eventually fell behind late. A service error allowed Texas to go up 22-21 before the Ducks rattled off three straight points to get to set-point. Vander Weide closed out the set with a kill.

With the second set tied at 16-all, Micaya White made a kill that started a seven-point run. Sun had two blocks and a kill in that stretch. Johnson also had two blocks during the run.

Texas got to set point when an attack error by Oregon made it 24-18 in the third set. Johnson’s kill gave UT the 2-1 set advantage.

Texas trailed 22-21 in the fourth set, but closed the match with a 4-1 run, capped with a kill by Ogbogu.

After loss to Florida, Texas is ranked fourth in newest poll