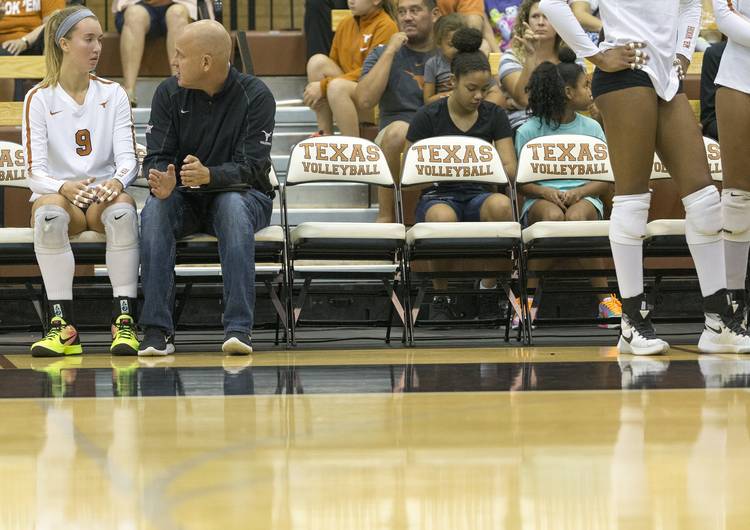 On Thursday, Texas’ volleyball team returns to Gregory Gym for its home openers against Texas A&M-Corpus Christi and Denver. UT’s roster is veteran-laden, so freshman setter Ashley Shook is among the few names that public address announcer Rich Segal needs to learn.

“She was awesome,” Shook said. “I’m just trying to live up to what she was able to do and do it better and be my own person.”

Shook, who was rated by PrepVolleyball.com as this year’s sixth-best overall prospect in the nation, was an Under Armour All-American as a high school senior. Last year she led Plainfield (Ill.) Central to a sectional final in Illinois’ state playoffs. Her AAU team won national titles in 2015 and 2016.

A setter since the age of 12, Shook enjoys the on-court control the position affords her. A thinking component is also a part of the job description: “There’s a lot of mental stuff that just goes with being a setter, whether it’s the pass or the blockers or the hitters,” she said.

“She’s not a true freshman in terms of the dialogue that we can have from player to coach,” Texas coach Jerritt Elliott said.  “The amazing thing is talking to the upperclassmen of how much trust they have in her and how much they enjoy playing with her, because she knows what she’s doing.”

The addition of Shook provides the offense with a 6-1 quarterback. (Her sophomore backup, La Grange’s Riley Fisbeck, also stands 6-1). That gives UT a different look than it had with the 5-7 Collins, who got the job done using her on-court athleticism and speed.

With Shook’s additional six inches, Texas expects quicker sets and a faster attack on offense. Elliott noted that having a taller setter allows the Longhorns to alter what they do defensively for half of their rotations. Opposing defenses also must account for Shook at the net. Through 18 sets, Shook has 12 kills and 32 attempts. Over 116 sets in 2016, Collins was successful on 52 of her 144 attacks.

“The most important battle to win the war is the setter versus the opposing middle blocker,” Elliott said. “I think you’re going to see a lot of one-on-one situations with Ashley’s ability to jump-set and dump and do some of those things.”

Of the eight Longhorns who have led the team in assists since Elliott’s hire in 2001, Collins was the shortest by an inch. Of those on-court directors of Texas offenses, Jenny Andrews (2003) and Ashley Engle (2009) were taller than Shook, and Texas won a national championship in 2012 with 5-11 setter Hannah Allison.

Elliott says he doesn’t have a preference in how tall his setter is, adding that “coaches get really caught up on the height.” Across the board, there doesn’t seem to be any prevailing wisdom about the height of a setter.

On the NCAA teams with the 100 best RPIs last season, the height of the leading setters ranged from 5-5 (No. 26 Boise State’s Jaymee-Lee Bulda, No. 44 USC’s Reni Meyer-Whalley and No. 76 Wyoming’s Courtney Chacon) to 6-3 (No. 12 Creighton’s Lydia Dimke and No. 72 Villanova’s Emma Decker). Of those 100 teams, 34 were led in assists by players who were at least six feet tall. Fourteen of the other setters weren’t taller than Collins.

Of the other three teams in last year’s Final Four, only Stanford — with 6-1 Jenna Gray running the Cardinal’s offense — had a setter as tall as Shook. Stanford beat Texas in the title match. Nebraska and Minnesota had 5-11 setters. Florida’s Allie Monserez, at 5-9, led the country with her 12.36 assists per set last season. (And Florida Atlantic’s Ivone Martinez, who’s also 5-9, was averaging an NCAA-best 13.55 assists per set as of Wednesday).

Of the four members of UT’s 2017 recruiting class, it took Shook the longest to get to campus. Middle blocker Brionne Butler and libero Olivia Zelon enrolled early and participated in spring drills. Outside hitter Lexi Sun arrived for the first session of summer school. Shook stayed with her club team this summer, so she didn’t get to Austin until August.

Shook, though, is quickly adjusting. Through five matches she’s distributing 8.89 assists per set. She ranks third on the team in digs.

“She is very open to feedback, which is nice as a teammate,” senior middle blocker Chiaka Ogbogu said. “She is very determined and very strong-headed. She works really hard, wants to get better, and wants all of her hitters to get better as well.”

Texas (4-1), ranked fifth in this week’s AVCA national poll, will host No. 1 Minnesota on Friday. Minnesota is led by junior Samantha Seliger-Swenson, the Big Ten’s setter of the year in 2016. Shook will counter with an array of weapons on her side of the net.

Outside hitters Micaya White and Ebony Nwanebu are reigning AVCA All-Americans, and Ogbogu earned the same honors from 2013-15. Sun was the Gatorade national high school player of the year her senior year.

“Just make everyone around me better, that’s my goal every day,” Shook said.  “I have great hitters, great options all around me. You really can’t go wrong most of the time with who I set.”

Bohls: If Longhorns and Aggies restart the rivalry at least ‘someone has to win’

Texas sports notebook: As No. 1 Minnesota awaits, UT sweeps in its return to Gregory Gym