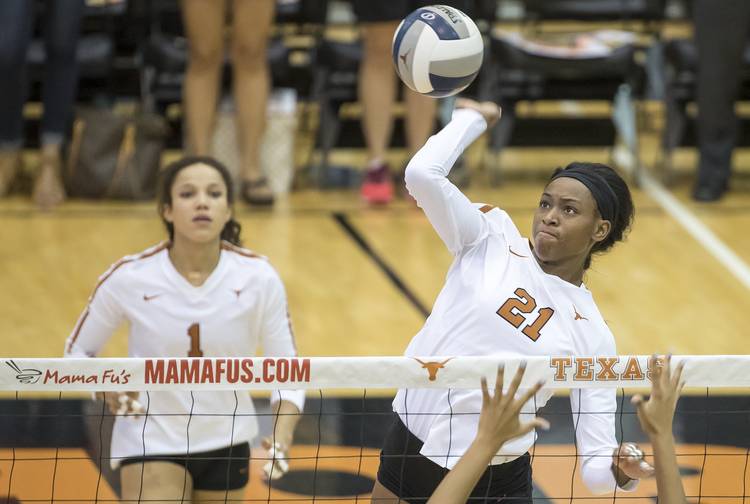 So far this season, Texas’ volleyball team has faced opponents ranked No. 2, No. 14 and No. 15 in the AVCA’s most recent national poll.

Since 2005, Texas is 4-6 against the country’s top-ranked team. That last win came over Nebraska in the 2016 Final Four.

Texas and Minnesota have each qualified for the last two Final Fours. (Both teams were beaten by Stanford last year). Two years ago, Texas earned a 3-1 win over the Gophers in the national semifinals.

Following Minnesota’s sweep of Denver at UT’s American Campus Classic on Thursday, opposite hitter Stephanie Samedy was averaging a Big Ten-best 4.42 kills per set. Samantha Seliger-Swenson, the Big Ten’s reigning setter of the year, was averaging 12.53 assists per set for an offense hitting .320.

Texas, meanwhile, counters with a lineup that features three All-Americans (Ebony Nwanebu, Chiaka Ogbogu and Micaya White). Outside hitter Lexi Sun was honored as the Big 12’s freshman of the week.

“They’re balanced everywhere,” UT coach Jerritt Elliott said Thursday. “They do a lot of things that we can do at the same physical level. Tomorrow will be a lot about executing over a period of time and seeing if we can slow them down.”

Over the first two weeks, Texas has been a hit at the box office. Florida, which averaged 744 fans per match last year, drew 7,523 for its season-opening win over UT on Aug. 25. And San Diego announced a crowd of 4,222 when it hosted Texas on Sept 2. (San Diego ranked 89th nationally in 2016 with its average attendance of 536).

But will the home fans show the Longhorns that same love in their own 4,000-seat gym? Texas, which ranked seventh nationally in attendance last year, had 500 tickets remaining for the Minnesota match as of Thursday afternoon.

Sweeping the Islanders: After two weeks on the road, Texas returned home on Thursday and recorded a 25-13, 25-15, 25-20 sweep of Texas A&M-Corpus Christi in its home opener.

The Longhorns were set to return to Gregory Gym on Thursday night for a match against Denver.

Texas scored the match’s first five points and strolled to a 12-point win in the opening set. Sun and Ogbogu each contributed five kills, and neither player needed more than seven attempts. As a team Texas hit .542 in the first set with only two attacking errors.

TAMU-CC played a little closer in the second and third sets, but the Longhorns pulled away in both. Texas (5-1) hit .394 on Thursday afternoon. The Islanders (3-5) were limited to a .081 hitting percentage.

Sun led Texas with 11 kills, and Ogbogu and White each added 10. Freshman setter Ashley Shook paced the offense with 35 assists. Sophomore Orie Agbaji, who was celebrating her 20th birthday, and Ogbogu each contributed a team-high three blocks.

Going for history: The UT soccer team hosts No. 25 Colorado on Friday before closing out its weekend Sunday against Northeastern. Texas is 5-0 and only three victories away from matching last year’s win total.

Texas has never opened a season with six straight wins.

No. 5 Texas slams Denver in tune-up for No. 1 Minnesota