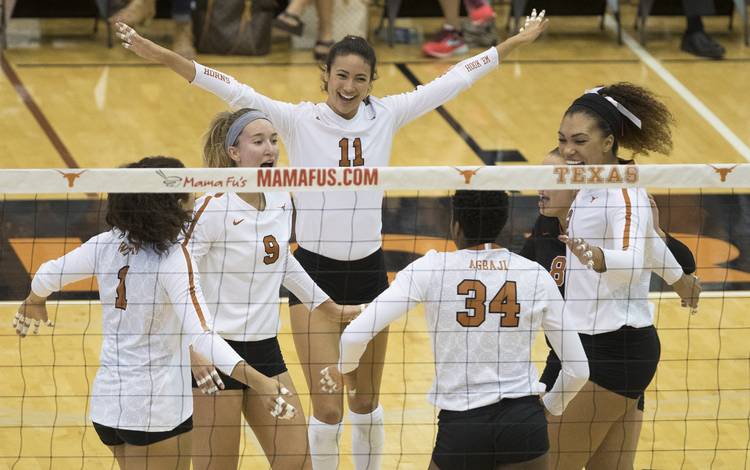 Freshman Lexi Sun produced 13 kills as Texas compiled a 25-19, 25-23, 25-17 conquest of Denver on Thursday night. The win gave UT a sweep through its first day at Gregory Gym this season. Earlier in the day, Texas recorded a 3-0 victory over Texas A&M-Corpus Christi.

Texas, which played its first five matches on the road, improved to 6-1. The Longhorns are ranked fifth in the AVCA’s national poll. Texas will play No. 1 Minnesota on Friday.

“I think we’re also excited to finally be home and have our crowd rooting for us, not against us,” Sun said. “That should be fun finally playing here against a really good team.”

UT led by as many as seven points in the first set, but Denver provided a tougher test in the second game. The Longhorns, though, kept the possibility of a sweep alive as sophomore Micaya White provided eight kills and senior Chiaka Ogbogu played the role of a closer.

Ogbogu snapped 22-22 and 23-23 ties with kills. She then teamed with freshman setter Ashley Shook on a set-clinching block. Ogbogu exited the second set with eight total kills and a .778 hitting percentage.

Ogbogu needed only 13 attempts on the evening to obtain 11 kills, and she also recorded seven blocks and an ace. Against Texas A&M-Corpus Christi, Ogbogu hit .714 with 10 kills.

“We called some plays for her late in that (second) game, because we knew she’s pretty high kill percentage,” Texas coach Jerritt Elliott said. “It’s what happens when you have an experienced player that’s been back.”

Texas never trailed in the third set. In addition to Sun and Ogbogu’s efforts, Texas got 11 kills from White. In what Elliott diagnosed as the best game of her young career, Shook had 33 assists.

“The only thing we need to improve before tomorrow night is we’ve got to make sure the serve-and-pass is a lot better,” Elliott said.

“I think we expect to see a very disciplined team. Obviously, they’re No. 1 for a reason,” Ogbogu said. “We’re excited to play them. We’re excited to just show what we’ve got.”

Texas sports notebook: As No. 1 Minnesota awaits, UT sweeps in its return to Gregory Gym