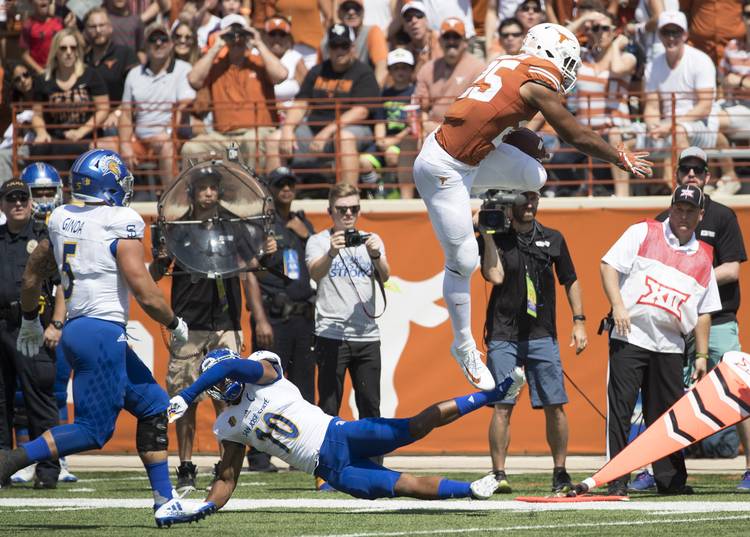 Texas running back Chris Warren III (25) tries to jump over (10) San Jose State safety Maurice McKnight in the first half of the game for a first down of an NCAA college football game at Darrell K. Royal Memorial Stadium in Austin, Texas Saturday September 9, 2017 RICARDO B. BRAZZIELL / AMERICAN-STATESMAN

Well we haven’t witnessed the first-half fireworks that went down in the opener against Maryland but the Texas offense put some points in the first two quarters for the first time this season and they did it behind a freshman quarterback.
The 21-0 halftime lead has the fan base feeling a bit better about the on-field product though San Jose State hasn’t shown the same juice as it did two weeks ago when it took a 16-0 lead against Charlie Strong’s South Florida team.

Freshman Sam Ehlinger got his first start in place of the injured Shane Buechele who is dressed for the game. The play calling seems to be geared toward getting running back Chris Warren going and it’s working so far. The 250-pounder has run for (WARREN stats) with a touchdown.
Ehlinger has gotten most of the snaps but junior Jerrod Heard has played mostly from the Wildcat formation. He rushed nine yards for Texas’ first touchdown then added another close out the half.
Ehlinger’s best moment came on the final drive of the first half when he scrambled for a first and completed a third-down pass late in the half to set up a TD. He finished 8-of-16 for 129 yards and ran six times for 46 yards.

After giving up 23 points in the first half last week, the Texas defense pitched a shutout, albeit against a less talented opponent. Linebacker Malik Jefferson kept the shutout alive when he met San Jose running back De Malik Jefferson met DeJon Packer head-on atop the pile and stalled him on a fourth-and-1 at the Texas 10.

Redshirt freshman receiver Reggie Hemphill-Mapps didn’t play in the first quarter, causing the scribes in the press box and Longhorn Nation to wonder why the DNP after he was the Longhorn star last week?
Well word came down with 12:28 remaining in the second quarter that he was suspended for the first half for a violation of team rules. Expect to see him in the third quarter since the passing game has been up-and-down in the first half.