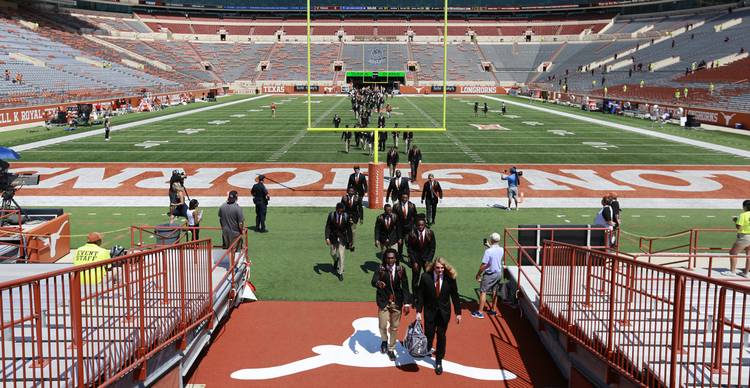 Goose was comfortably settled in his chair, and all was right with the world.

From his low-riding, burnt-orange perch along Robert Dedman Drive — just a Michael Dickson punt away to the southeast of Royal-Memorial Stadium, Goose was in his happy place. Kickoff for Texas’ game with San Jose State was still about three hours away, but Goose — his real name is Lynn Gostecnik, “but everyone just calls me Goose” — was appreciating life, even if life had not been appreciating him that much for the past couple of weeks.

Like so many other of his fellow Texans, Goose got hammered recently by that bad boy, Harvey. The hurricane that pummeled his hometown of Houston as well as much of the Gulf Coast sent flood water into his home in the Memorial section of town. Luckily, he had his ranch to retreat to in Brookshire, west of Houston, which escaped the worst of the storm.

It was from there, at 5 a.m. on the opening Saturday of football season, that he made the drive to Austin for the Longhorns’ season opener against Maryland.

“It was just a relief to come up here last week,” he said.

But then the game started. Heavily-favored Texas got popped 51-41. So did the expectations of many of its fans who’d flocked to Tom Herman’s debut as the Longhorns coach anticipating so much, but not a repeat of the kinds of self-destructive tendencies that doomed the three sub-.500 seasons of Charlie Strong.

Fans didn’t take it well on Sept. 2. Boos cascaded down onto the field near the end of the game as well as cardboard hand-held fans from some of the most agitated orangebloods. Even Goose, the eternal optimist when it comes to the Longhorns, admitted, “I wasn’t too positive about last week.”

But in the next breath, he added, “It’ll be OK. I’ve always been real optimistic about UT football. And I always will be.”

So he and the other Texas faithful returned to DKR on Saturday on a picture-perfect, Chamber of Commerce day in Austin. The crowd, officially listed at 88,117 in the 100,119-seat stadium, was a bit subdued, not as giddy as the Longhorns’ first game before the roof caved in and Herman went from the honeymoon to the hot seat.

RELATED: Chris Warren III bounces back from Week 1 with a vengance

But on this Saturday, they went home relatively happy after a 56-0 victory in freshman quarterback Sam Ehlinger’s coming-out party after the shoulder injury in the opener to Shane Buechele. But even after the shutout, not even the most passionate of fans were declaring the Longhorns miraculously back in the playoff picture, if for no other reason than 1-2 San Jose State won’t be confused for Penn State or Florida State or, especially, its in-state neighbor USC.

The fourth-ranked Trojans, who looked like every bit of a playoff contender Saturday night with a 42-24 rout of highly-regarded Stanford, host the Longhorns this Saturday night.

“If we get a big win (vs. USC), perspectives will change and this place will be hopping for Kansas State (Texas’ next home game opponent, on Oct. 7),” Micah Hirschfield, another UT season-ticket holder from the Houston area, said after Saturday’s game. “But a day like today, everybody is happy. The fan base and players need to remember how this feels.”

Saturday’s pre-game atmosphere didn’t have the almost-carnival like aura of the countdown to the opener against Maryland. While some were preaching caution, many fans were cautiously hoping that the Longhorns — who haven’t been on the national radar since the 2009 season — might finally be a fixture again on the blue-blood landscape of college football.

Before the San Jose State kickoff, however, it was readily apparent that few were still under that impression.

Chad Hastings, who co-hosts along with former UT assistant coach Bucky Godbolt a segment of the pre-game radio show on 104.9 The Horn, Texas’ flagship station, said the change in atmosphere was noticeable even from his broadcast location in the north end zone of the stadium.

“It has to be different because of what we saw last week,” Hastings said. “There’s a little more tense and pensive feeling.

“There was so much confidence last week that things would be all tied up and taken care of after nine months (since Herman’s hiring),” he added. “And when you saw they weren’t, I think there was anger and upset feelings in the stadium. I think now Texas fans have been able to kind of back up and take a more realistic look at things.”

Indeed, if there was one word circulating through the fans outside the stadium before and after the game, it was “patience.” Maryland was a reality check. Trouncing the Spartans didn’t alter the perception significantly.

“But patience is a virtue.”

It’s also a rare commodity among the fan bases of programs with long histories of success. Programs like Texas.

But the faithful are keeping the faith.

They include Leonard Carlile, who made the long drive to Austin with his family from their home in Amarillo (with a detour through Arlington to watch the Texas Rangers play the New York Yankees on Friday) for their annual Longhorns game.

The family was among a couple of thousand fans who flanked the Longhorns players and coaches as they made the walk from the team buses to the stadium about two hours before kickoff. Carlile said he watched the Maryland opener on TV in Amarillo.

“Well, most of it. For as long as I could,” he said with a rueful chuckle. “That game was why I’ve quit drinking the Kool-Aid every year. I’m just going to wait and see what happens. But I’m still a fan.”

Ditto for John Nieto. The San Antonio native and resident returned for a Longhorns game for the first time since he graduated from UT about 30 years ago. While a student, he was a trumpet player in the Longhorn Band.

“This is the first time I’ve needed a ticket to get in the stadium,” Nieto said with a laugh after the game.

Once inside, though, Nieto liked what he saw. His expectations are tempered, but remain high.

“They always should be high,” he said. “Why play if you don’t want to win a championship? That should be everybody’s expectation. I’m always optimistic — I’ve always been a fan — but it’s just going to take a while.”

How long is a while? Who knows?

Goose is eager to find out. To the 70-year-old Houstonian, it’s not a matter of if. It’s when. In Tom he trusts.

“The players need to start believing in themselves. The excitement will come back. Just sit back and watch,” Goose added. “In two or three years, you’d better buckle your chinstrap, son, because those old Riddell helmets are going to pop.”

Editor’s note: Randy Riggs covered college football for the American-Statesman for 35 years, including coverage of Texas as the main beat writer from 2010 until he retired in December 2013. His final game also was Mack Brown’s final regular-season game, the 30-10 loss to Baylor in Waco on Dec. 7, 2013.