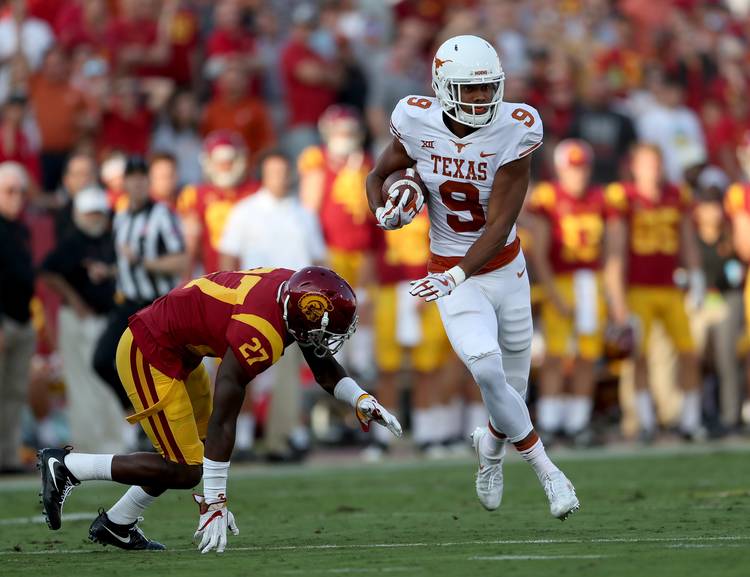 The 16-point underdog Texas Longhorns are in this one and USC looked nothing like the No. 3 team in the nation until Sam Darnold hit running back Ronald Jones II with a 56-yard catch-and-run touchdown on the last of the half.

USC 14, Texas 7.
Credit Texas for making this game much more intriguing than many of us believed it would be through two quarters coming in though that last play was  a real kick in the teeth.

DEFENSE ALL OVER DARNOLD EARLY

After the two worst defensive seasons in school history, the Horns played their best ball in years against a high-powered offense led by a legitimate Heisman Trophy contender. The Trojans went for it twice on fourth-down and were stymied both times, the second on a goal-line stand led by Naashon Hughes. The defensive play of the half came with 19 seconds left when DeShon Elliott picked off Sam Darnold  on  deflection and returned it 38 yards for Texas’ third pick-six of the season.

Linebacker Edwin Wheeler is having a career game three eye-opening plays, including a huge sack of Darnold who hasn’t played like the best player in the country as of yet. The Horns are playing the kind of spirited ball that can make an upset possible. If you told defensive coordinator Tom Herman before the game that his team would be down seven with a would-be national title contender at the half, he would take it everyday of the week and twice on Saturday.

EHLINGER GETS THE START

It doesn’t appear as if Shane Buechele will see action in this one. Freshman Sam Ehlinger got his second consecutive start and while it’s been some slow going offensively against a pretty good USC defense he has played within himself. he is 5-of-10 for 89 yards and an interception. Jerrod Heard has been on for a handful of plays but hasn’t looked to throw against USC defense  that’s obviously expecting him to run every time he touches the ball.

He started out like gangbusters with a 50-yard pass to Collin Johnson but there weren’t many big plays to speak of.  The bad news comes up front where All-America offensive tackle Connor Williams has been ruled out with a leg injury. Derek Warehime moved Tristan Nickelson to left tackle and Denzel Okafor to the right.

Williams’ loss is epic moving forward because the UT offensive line was dominated late in the second quarter. At one point, Ehlinger was sacked three straight times.

If you’re a Texas fan, all you can hope for is another spirited half by this defense and for the offense to figure out a way to move the ball. The Horns have only one yard on 17 carries. You have to give the Trojans the edge in the second half but Texas has shown it isn’t intimidated by that national ranking. Let’s see if the Horns can get some offense going. They get the ball to start the third quarter.