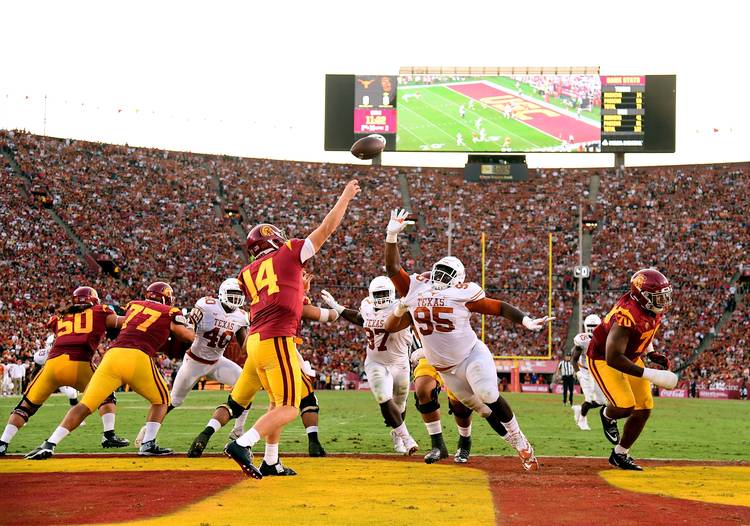 Sam Darnold #14 of the USC Trojans passes over Poona Ford #95 of the Texas Longhorns during the second quarter at Los Angeles Memorial Coliseum on September 16, 2017 in Los Angeles, California. (Photo by Harry How/Getty Images)

One AD’s take: Texas would have been good as a member of the Pac-12

USC athletic director Lynn Swann empathized with the decline of Texas football because his own USC program had to overcome the loss of 30 scholarships and now boasts a top-five ranking. “It doesn’t seem odd because every program can have down periods,” he said. “I know it’s difficult to take for the Texas fans, but at some point in time, Texas will get back on top.” Asked about Texas’ flirtation with joining the Pac-12, Swann said, “A lot of people probably thought that was something that wouldn’t happen. It seemed too far-fetched. But you look at how the Pac-12 could have been with the Texas market as part of the package, it makes a lot of sense.” When I asked Pac-12 commissioner Larry Scott jokingly about realignment at halftime of the Texas game, he said, “No discussions going on in our conference office about it. I don’t think you’ll see much discussion about it for a while.” That freshman walk-on kicker for USC who kicked the game-winner? Texas Tech tried to get him to walk on.

Is next week’s Longhorn game a trap game for Texas? Or Iowa State?

The Texas football team has plenty on its plate during this bye week to prepare for its next game against Iowa State. Some have suggested this may be a trap game, and it might be. For Iowa State. Hey, the Cyclones have been as consistent as the Longhorns and have looked decent. Neither team should be overconfident. Besides, can a 1-2 team be complacent? … Texas has its work cut out for it just to make a bowl appearance. It’s probably mandatory that the Longhorns beat Iowa State, Baylor, Kansas and Texas Tech. Even that wouldn’t be enough, so they have to knock off Kansas State, West Virginia, TCU, Oklahoma or Oklahoma State to get a sixth victory. … Through three games, I see an emerging identity. Texas’ biggest strength? I’d say it’s the front seven. Poona Ford has led a very good defensive line and Malik Jefferson and Anthony Wheeler had their best games as a Longhorn.

NFLDraft.com expert Lance Zierlein tells me All-American left tackle Connor Williams’ draft stock could slip if he chooses to leave school early, “but I thought he was playing below the standards he had set in the previous couple of seasons.” Williams has another season of eligibility left. He could return after his knee surgery and play later this season or next year or come out early. If he does choose to play again in 2017, he risks affecting his draft grade. “Anytime you play, you are putting your résumé on tape for pro scouts. Whether Williams is hurt or healthy, his tape is his résumé and he needs to put good work out there for NFL evaluators to study.”

For the rest of Kirk’s 9 Things, including his thoughts on Oklahoma State quarterback Mason Rudolph and Ezekiel Elliott, click here.