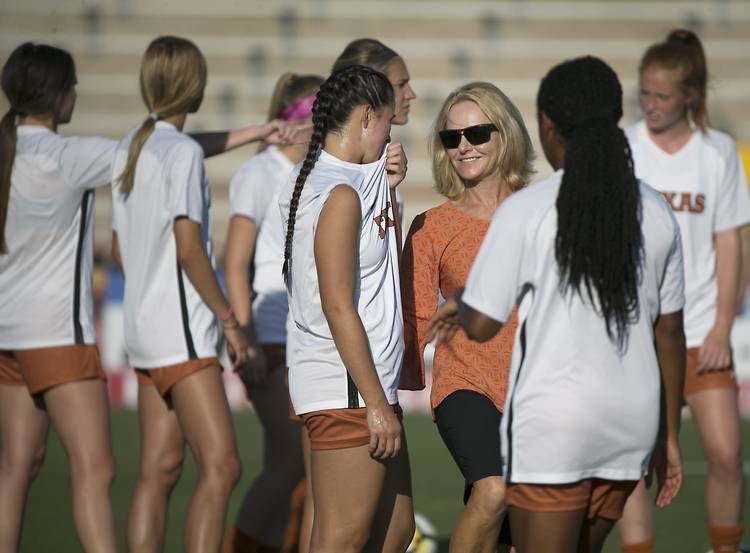 Later, as the head coach at Tennessee, Kelly took a middling Vols program and built it into one of the most feared in the SEC.

And now, five years into her tenure at Texas, Kelly’s relentless pursuit of perfection is starting to take hold. As Big 12 play begins on Friday, the 17th-ranked Longhorns are 8-0, one of only two unbeaten and untied teams left in the country. The other is No. 21 Tennessee.

In other words, so far, the Longhorns are perfect.

“(Perfection) has driven me my whole life,” Kelly said. “Ninety-seven percent of society is average and mediocre, and that’s fine. Three percent of the people are really going after it and pursuing excellence, and I want to be competing with those 3 percent.”

The Longhorns have climbed into the United Soccer Coaches rankings for the first time since 2010 and have already matched their win total from last season, when they finished ninth out of 10 teams in the Big 12. The best start in program history is the result of enough perfectionists gathered in one place, all pulling in the same direction, and it didn’t just start when the team convened for preseason in August.

The Longhorns are quick to point out the contributions of players like goalkeeper Abby Smith, currently of the Boston Breakers and the U.S. Women’s National Team, or midfielders Lindsey Meyer and Julia Dyche, or forwards Kelsy Shimmick, Jasmine Hart and Sydney Shutter — all of whom have moved on from UT.

“They built the foundation for this,” said junior forward Alexa Adams, who has one goal and one assist this season. “Every year we’ve had a learning lesson and I think that’s helped us to where we are right now.”

Stacked on top of the sturdy foundation is an influx of elite talent. Texas’ 2017 recruiting class was ranked 14th in the country and the 2016 class ranked 15th. Both classes were at the top of the Big 12, and many of those players have already started to contribute.

“We really just look for players that we don’t want to play against,” Kelly said.

Kelly labels her players “future professionals” and expects them to live by her “R.A.M.P.E.D.” mentality — letters that stand for respect, accountability, mentality, pursuit of excellence, effort and discipline.

In their quest to achieve Kelly’s “perfect 90 minutes” of soccer, the Longhorns have arrived on the doorstep of the sport’s elite. The coach is quick to point out that they’re not there yet.

“We’re nowhere near a finished product,” she said. “We have a ton of room for growth.”

There’s no denying that the perfect record, as well as a 3-0 win over No. 25 Colorado followed by back-to-back sudden-death overtime victories over Northeastern and UT-Rio Grand Valley, have built a buzz not seen in years.

“‘Wow, Texas soccer. They’re really bringing it this year,’” junior defender Chelsea Surpris said is the refrain she’s heard from other UT athletes. “That’s really got us feeling good about ourselves to carry that weight on our back, but in a positive way.”

It’s not perfect, yet. But Texas soccer is getting there.

Bohls: What does one Pac-12 AD think about Texas potentially in his conference?