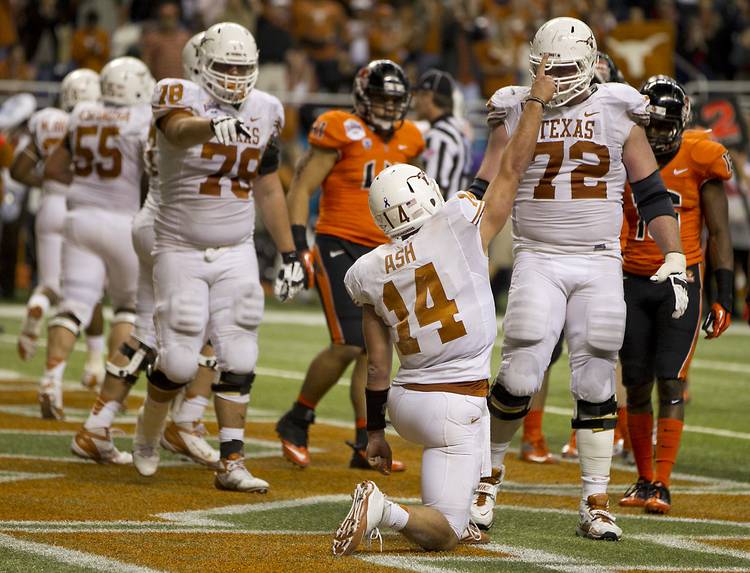 Texas' David Ash (14) points upward towards the ceiling as he celebrates his touchdown run against Oregon State during the second half of the Alamo Bowl held in San Antonio, Texas, on Saturday, Dec. 29, 2012. Texas defeated Oregon State 31-27. Rodolfo Gonzalez / Austin American-Statesman

The Texas Longhorns bounced back in 2011 after a terrible 2010 season and 2012 was another step in the right direction albeit with warning signs — like lots of warning signs.

Texas was back in the preseason poll at No. 15

Garrett Gilbert was no longer there as a quarterback option and it was down to the two men who split time in 2011, Case McCoy and David Ash, and a third quarterback, Connor Brewer. Ash won the full-time job and would go on to have the last great Mack Brown era quarterback seasons. Ash threw for 2,699 yards with 19 touchdowns and just eight interceptions. He completed 67.3 percent of his passes and played in 12 games.

Brewer eventually transferred to Arizona again to Virginia, where his eligibility finally ran out in 2016.

The talent on defense continued to be hard to ignore. Texas featured standouts Kenny Vaccaro, Alex Okafor, Jackson Jeffcoat, Quandre Diggs and Carrington Byndom. Okafor, a local product from nearby Pflugerville High School, had 12 sacks in 2012, while Diggs led the team with four interceptions.

However, despite the talent, the numbers didn’t correlate. In fact, Texas finished the season No. 80 in total defense — they were 12th in Diaz’ first season (which actually resulted in Diaz being mentioned as next Longhorn assistant turned head coach) in Austin — allowing 404 yards per game and 192.2 yards per game on the ground in a passing league. The pass defense was actually not terrible considering the offenses in the Big 12, allowing just 212 yards per game in the air. Texas’ 29.2 points allowed ranked 74th in the country that season.

The 2012 season is the start of what still remains one of the worst — probably the wors t– defensive eras in Texas football history as the defense didn’t improve much in 2013 and statically was the worst in program history in 2015 followed by 2016.

Offensively, second-year coordinator Bryan Harsin and co-coordinator Major Applewhite had the unit at No. 37 in total offense, up from 50th in 2011 — likely due to the improvement at quarterback.

Texas ripped off four straight wins to start the season, including piling on 66 points in a 66-31 win at Ole Miss against a quarterback, Bo Wallace, who once considered coming to Texas.

Texas started the Big 12 with a 41-36 win in Stillwater against Oklahoma State that put the Longhorns at No. 11 in the nation.

The next week Texas’ season took its first turn when the Longhorns were in a shootout with No. 8 West Virginia at home.  Facing a preseason Heisman contender in Geno Smith, Texas led 38-34 heading into the fourth quarter but two Mountaineer touchdowns in the final frame gave them an insurmountable lead. Texas scored a touchdown with 15 seconds left, but couldn’t recover the onside kick and lost the game.

There may have been a hangover effect the next week. Oklahoma led 36-2 at halftime in the Cotton Bowl. The Sooners won 63-21.

The Longhorns won their next four games, but it wasn’t easy. The highlight (lowlight?) came when Texas needed everything it could muster on the road against cellar dweller Kansas, prodding Statesman columnist Cedric Golden to exclaim “Holy Mangino, Batman: We’re about to lose to Kansas.”

He added something Charlie Strong should have noted before he did lose to Kansas on the road in 2016: “This would’ve been Armageddon in Middle America, Texas’ worst nightmare come to high-definition reality.”

Then the next two weeks happened. First-year Big 12 program TCU beat Texas in Austin 20-13. The next week Texas lost to No. 7-ranked Kansas State 42-24 on the road.

The Longhorns accepted an invite to the Alamo Bowl to play No. 15-ranked Oregon State.

The 31-27 win over the Beavers is the last bowl game Texas won under Mack Brown and the haven’t won a bowl game since this Dec. 29 matchup. The Longhorns have only played in one bowl game since 2012, and they lost that Alamo Bowl (oh, spoiler alert for the 2013 season?) 30-7 to Oregon.

Against the Beavers, the Longhorns trailed 20-10 at halftime and 28-17 entering the fourth quarter. Then Johnathan Gray hauled in a 15-yard touchdown from Ash that was followed by Marquis Goodwin’s 36-yard touchdown catch with 2:24 remaining in the game to Texas the lead.

Okafor had 4.5 sacks and Ash had Longhorn fans looking forward to next season.

Statesman columnist Kirk Bohls wrote: ” The home-schooled, Scripture-quoting sophomore from Belton cut his long blond locks, shook off the rust that had accumulated since his last action on Thanksgiving night and showed the moxie and the magic that Texas thought he had right up until the final two games.”

Was Texas “back” after a 9-4 campaign and a bowl win? People thought so, which is why 2013 season changed a lot of things at Texas.