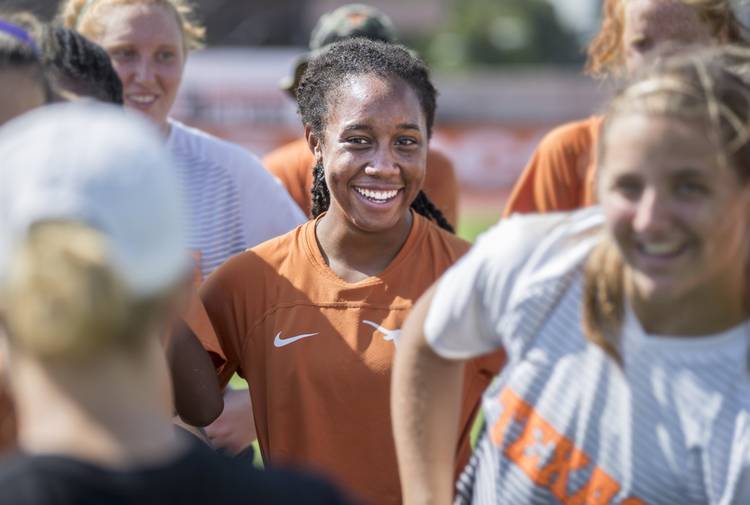 Texas soccer player Nakia Graham during practice on Thursday September 21, 2017 at Mike A Myers Track and Soccer Stadium. Graham, who is an avid painter off the field, is the daughter of an Olympian hurdler and her siblings have shined in track and tennis at nearby Westwood High. RICARDO B. BRAZZIELL / AMERICAN-STATESMAN

Nakia Graham doesn’t speak much about herself. In fact, the Texas junior soccer player prefers to keep her story “on the down-low.”

Graham is a midfielder on UT’s 8-0 soccer team. She’s the daughter of an Olympian and sister of a state champion. Her first name is the inverse of her older brother Aikan’s. Thanks to the auto-correct on teammate Katie Glenn’s phone, she’s earned a nickname of Nacho that “low-key annoys me.”

She’s majoring in international relations and global studies, in part because her father is Jamaican and her mother is German. Graham paints and writes. She recently got a quotation mark tattoo on her right wrist that she says symbolizes everything from her passions to the suppression of African-American voices.

“Nakia’s just a really special soul,” Texas coach Angela Kelly said. “She’s not one of those people on the team that just talks, talks, talks … until she’s asked, and she always has a very thoughtful perspective. When Nakia speaks, I always turn and hear what she’s going to say.”

Graham, in her third season, has been a part of the best start in school history. At 8-0, Texas is joined by Tennessee as the only Division I teams without a loss or tie. The Longhorns are ranked 17th in the United Soccer Coaches’ poll and third in the RPI rankings.

Texas opens up Big 12 play on Friday with a home match against Iowa State. UT hosts No. 5 West Virginia on Sunday.

“The expectation is to win every game, so I think that we’re off to a great start,” Graham said. “Obviously there’s still a lot of season left to play. Right now, we’re just worried about whoever is next.”

Graham registered one assist and has played 330 minutes in her first two seasons. She’s seen more playing time this year, taking three shots in her seven matches, but is currently sidelined by a quad injury.

“I have absolutely no qualms in trusting and knowing that when Nakia’s on the field, she’s going to get the job done,” Kelly said.

Graham is a Longhorns legacy. Her father, Winthrop, ran track at Texas from 1987-89 and won Olympic silver medals for Jamaica in Seoul in 1988 (1,600 relay) and Barcelona in 1992 (400-meter hurdles). He still owns UT’s record for the 400-meter hurdles. Graham concedes that her father in the best athlete in the family. But Winthop Graham’s hardly the only standout.

Graham’s mother, Yvonne, ran the 1,500 meters for East Germany at the 1989 World Indoor Championships. Aikan Graham was a hurdler at Texas A&M. Graham’s younger sisters — Kiana and Kinaa — both play tennis; Kiana won the Class 6A singles state title last year as a freshman at Westwood.

“It’s definitely a privilege,” said Aikan Graham, who works at Dell. “We’re blessed with good genes, so therefore it’s a waste if we don’t use them. We’ve done a pretty good job of taking advantage of that.”

Graham has played soccer since she was four or five years old. She’s also dabbled in basketball (“Even though I’m really short,” noted the 5-4 Graham), tennis and volleyball. Graham, though, was focusing solely on soccer and track by the time she got to Westwood.

Whereas her family members shined in individual sports, Graham said she migrated toward soccer because of the team aspect. Soccer, she says, is the best fit for a personality that her brother described as thoughtful and introverted.

“It’s just whatever sport fits with our personalities,” Graham said. “I know that (for) my sisters, tennis fits their personalities perfectly. My brother was such a track person, and I think soccer fits me.”

Off the field, Graham has plenty of hobbies. She draws, writes and reads. She enjoys traveling and chose her major in an effort to learn about different cultures. Graham also paints, a passion that has led to in-home work as an interior decorator since she becomes attached to her artwork.