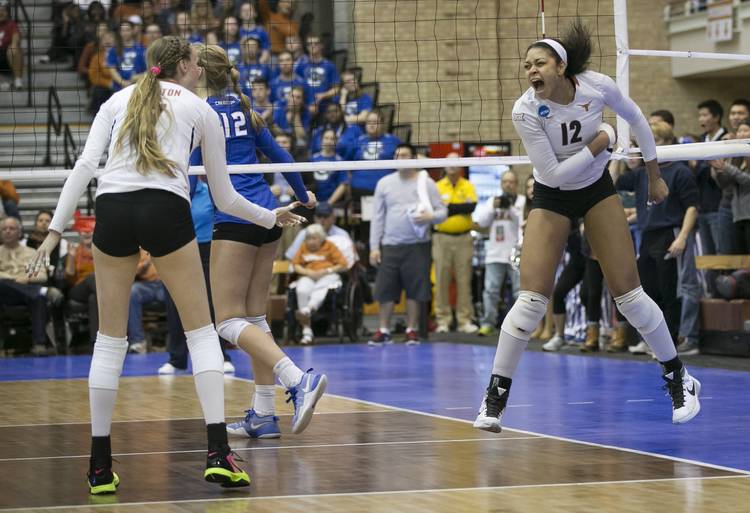 UT's Morgan Johnson, right, celebrates a kill with teammate Nicole Dalton in the third set against Creighton at the regional round of the 2016 Division I Women's Volleyball Championship at Gregory Gym on Saturday December 10, 2016. JAY JANNER / AMERICAN-STATESMAN

The 6-3 middle blocker from DeSoto is currently averaging 1.53 blocks per set, which trails only senior Chiaka Ogbogo’s average of 1.56 on UT’s roster. As a team, Texas leads the nation with its 3.49 blocks per set.

“Morgan doesn’t get a lot of notoriety in our program just because there’s so many live arms and people that can put up big numbers,” UT coach Jerritt Elliott said. “Defensively, she’s one of our glues. She’s our best blocker. Her numbers have been really good. She see things at a high level and continues to improve every week.”

This has thus far been a light awards season for Texas, which is ranked fifth in the AVCA’s national poll. Johnson is only the second Longhorn honored by the Big 12. Outside hitter Lexi Sun has earned two of the conference’s five freshman of the week awards.

Texas (9-2) will host Baylor (12-3) in a conference clash on Wednesday. Texas owns a 79-2 lead in its all-time series with Baylor. UT has never been beaten by the Bears in Austin, and Baylor’s last win over Texas came in 2001.

Baylor, though, is off to a 2-0 start in conference play. Katie Staiger leads the conference with her 5.29 kills per set, and the senior earned the eighth Big 12 offensive player of the week award of her career on Tuesday. Setter Hannah Lockin was named this past week’s top freshman by the Big 12.

“I think this conference has definitely stepped up a notch within the last couple years,” Sun said. “A lot of the teams are very competitive now, so we have no nights off and we can’t take anyone lightly.”

Texas and Baylor will play at 7 p.m. The Longhorns will return to Gregory Gym on Saturday afternoon for a meeting with Kansas State (8-7).

Texas soccer climbs into top 10 in all major polls