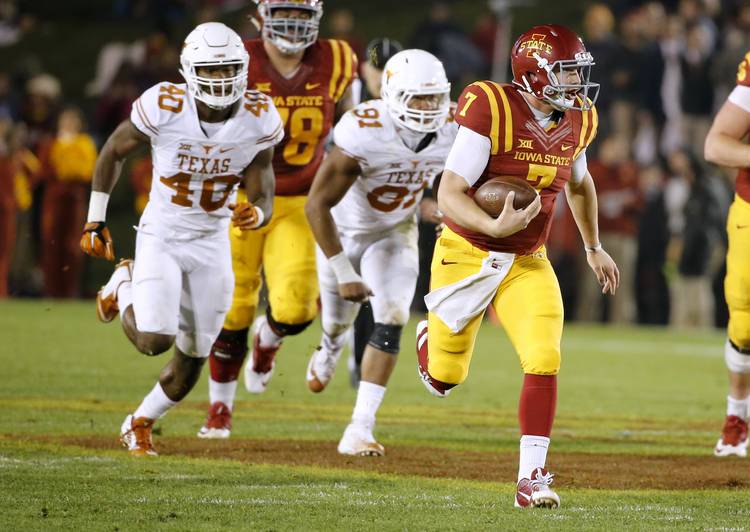 Quarterback Joel Lanning #7 of the Iowa State Cyclones breaks away from defensive end Naashon Hughes #40, and defensive end Bryce Cottrell #91 of the Texas Longhorns while rushing for yards in the first half of play at Jack Trice Stadium on October 31, 2015 in Ames, Iowa. (Photo by David Purdy/Getty Images)

On what to expect Thursday night in Ames:

One cannot overstate the importance of Thursday’s Iowa State game to Tom Herman’s first season at Texas. Several players said all the right things Monday night but I was a little caught aback when linebacker Naashon Hughes, in explaining some of the reasons for Texas’ 24-0 shutout loss in its last trip to Ames, mentioned the raucous crowd, the intimate small stadium and, uh, the Jack Trice Stadium grass. Yeah, the grass. “The grass is different there,” said Hughes, who is a smart dude. “It’s a thicker cut.” I remember when I visited with Charlie Strong in Tampa that he mentioned his Texas players were griping about the grass during pre-game warmups at Ames. “I thought, ‘Uh oh,’” Strong said. … A few interesting Cyclones stats: Their offensive line has allowed one sack in three games. Their defense is giving up just 107 rushing yards a game and has surrendered only one touchdown on the ground. Sorry, Chris Warren III. Iowa State is also a plus-4 in the turnover category, and its opponents have scored just three points off the Cyclones’ two turnovers.

On what the health of the offensive line means for Texas’ season:

Texas’ offensive line could be in a world of hurt if reinforcements like junior Terrell Cuney, true freshman Derek Kerstetter and redshirt freshman J.P. Urquidez don’t mature quickly and provide some much-needed relief up front. With the loss of two potential starters, including All-American tackle Connor Williams and top reserve Patrick Hudson, as well as the transfer of Jean Delance to Florida, the Longhorns have to hope they don’t sustain any more injuries. Right guard Jake McMillon said he, center Zach Shackelford and left guard Patrick Vahe have not come off the field in the first three games, all 247 snaps. That’s usually a recipe for disaster and more injuries, but the patchwork line may well be the biggest key to the rest of the season.

On the Baylor-Oklahoma game on Saturday:

Was thoroughly impressed with Baylor’s play despite being overmatched by Oklahoma. I’m betting Matt Rhule gets it done but hardly overnight. Remember, he had one commitment when he showed up at Waco and eventually signed 27 players. He’s playing a ton of them. He sure seems to have his franchise quarterback. Sophomore Zach Smith looked terrific. He has such a quick release and he’s so accurate. I have no idea why Anu Solomon started the first two games because Smith clearly has the it factor. The problem is, the Bears can’t run the ball against top defenses and can’t stop the run either.

For the rest of Kirk’s 9 Things, including his thoughts on the college basketball corruption scandal and his Top 25 vote this week, click here.