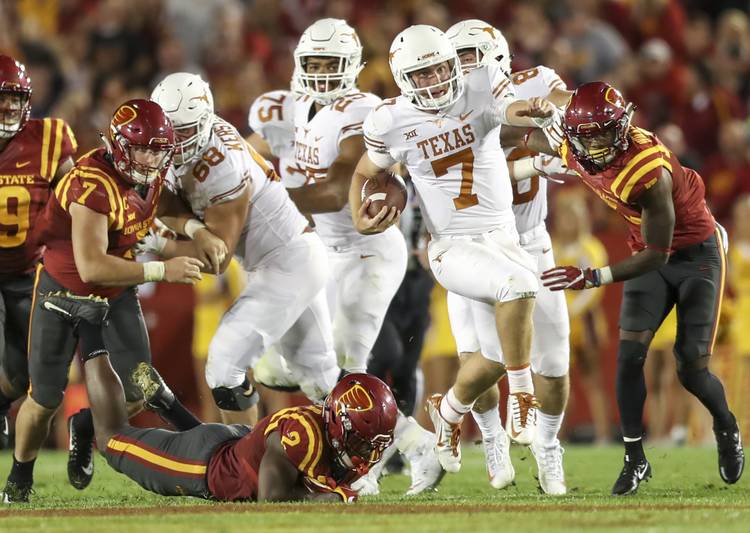 Texas quarterback Shane Buechele (7) slips out of the grasp of Iowa State linebacker Willie Harvey (2) to extend a play during the first half of their NCAA college football game at Jack Trice Stadium in Ames, IA on Thursday, September 28, 2017. RICARDO B. BRAZZIELL / AMERICAN-STATESMAN

Chalk one good half up for the defense.

In a game Texas sorely needs before the meat of the schedule happens, the Horns got a great half from its tacklers.

After playing well for most of the loss to USC and its great quarterback Sam Darnold, the Horns pitched a first-half shutout against Iowa State and quarterback Jacob Park. Texas allowed only 127 yards and 3.5 yards per play. Just as important, Texas forced a pair of turnovers, getting interceptions from DeShon Elliott and Kris Boyd.

Defensive coordinator Todd Orlando isn’t playing it conservative with his play calling either. He has sent plenty of blitzes at Park and has gotten some good push from his front seven, including defensive end Charles Omenihu who has played really well of late.

Buechele back at QB

To no one’s surprise, sophomore quarterback Shane Buechele returned to the starting lineup and had some nice moments though he did take a couple of wicked shots while scrambling. Boo Jr. completed 10 of 13 passes for 108 yards and a touchdown to Toneil Carter while getting blasted in the pocket.

Also, running back Chris Warren III got some good first-quarter work. After getting only four carries for 15 yards at USC, he carried it nine times for 31 yards and a touchdown in the first carry. He did not attempt a carry in the second quarter but caught a pass for 17 yards on the last play of the half.

Michael Dickson could work for half the teams in the NFL right now. Texas’ punting phenom booted punts of 61, 60, and 56 yards in the first half. That’s a tidy average of 59 yards per punt. That works at any level I suspect.

The defense has this one on lock but can’t let off the gas because Iowa State has some nice skill people on offense.

Another takeaway and a score and the Horns could be on their way to their easiest Power 5 win in quite some time. Texas knows it’s far from over but it’s the Horns’ game to win or lose at this point.