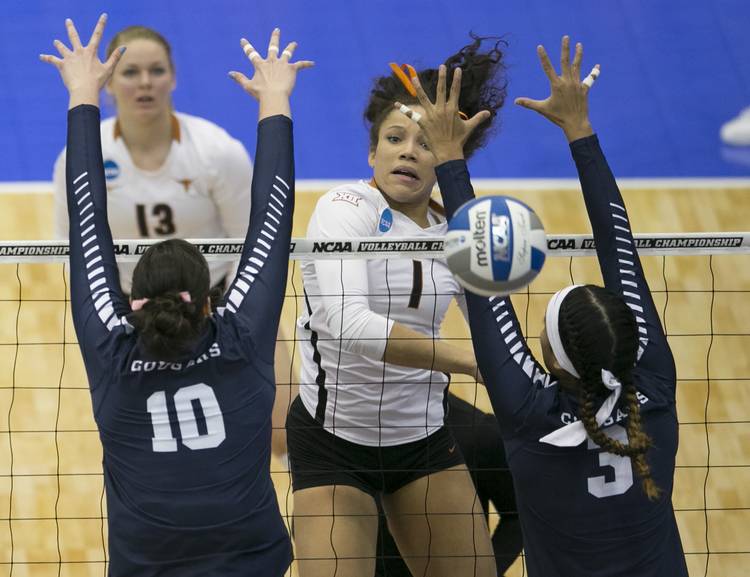 Before a short break on its schedule, Texas tidied up Gregory Gym with a sweep.

“The past two games have felt probably the best it’s felt throughout the whole season,” middle blocker Morgan Johnson said. “I think it shows that our hard work is paying off and things are starting to jell together and we’re starting to hit our stride.”

The fifth-ranked team in the AVCA’s national poll, Texas never trailed or needed to use a timeout on Saturday. Texas scored eight of the match’s first 10 points and Kansas State committed six service errors in the first frame. The Longhorns opened the second and third sets with 7-2 and 8-3 runs, and an over-matched Kansas State team was unable to keep up.

Texas was led by sophomore outside hitter Micaya White, who had 14 kills and 10 digs. Freshman Lexi Sun added 10 kills.

“I think everyone played kind of fearless,” said Nwanebu, who had six kills. “Just going for everything and not being afraid to get blocked really worked for our offense. I think that’s a big reason a lot of us did very well.”

Texas scored the match’s first point with a combination block by Nwanebu and Johnson, and UT later earned three straight second-set points off blocks. The Longhorns exited the afternoon with nine total blocks, which actually put Texas off its season-long pace. Texas was leading the nation with its 3.45 blocks per set.

Johnson, who was named the Big 12’s defensive player of the week on Tuesday, credited her coaches for the defense’s success at the net. Associate head coach Erik Sullivan oversees the UT defense.

“They give us a scouting report and tell us certain things for each team before each game,” Johnson said. “Buying into that and focusing on that during the game, it makes it a lot easier to do what you need to do.”

Texas coach Jerritt Elliott said those blocking statistics were buoyed by his team’s physicality and repetitions in practices. Elliott assessed that “tonight was the best night we’ve had in terms of being all over their play sets and understanding where their percentages were.”

Added Elliott: “As you get further into the season, you get more data to know what percentage of players are getting what balls and how we can overload on that a little bit more and use some of the information to our advantage.”