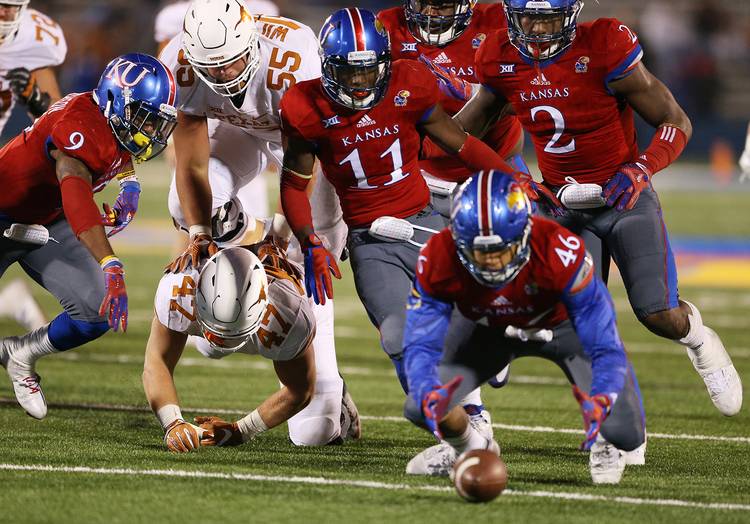 We’ve made it. This is the most recent completed Longhorn season. And in fitting fashion, it played a significant role in the history of Texas football.

First, it’s difficult to not forget National Signing Day 2016. A middle of the road recruiting class was transformed into one of the best recruiting classes in years for Texas when a bevy of highly-touted and talented players jumped on board in the final days of the recruiting season. The day was best summed up by Dallas-area product Chris Daniels when he told the Dallas Morning News:  “All I’ve got to say is that if you don’t want to go to Texas, don’t let him get on your couch. Because that man is very persuasive. He’s like an uncle to me. Uncle Charlie, for real.”

The recruiting momentum helped turn the tide for Strong, but also the coaching changes on offense. In one of the more bizarre stories ever at Texas, and one that could easily be forgotten given what would happen in 2016 is the hiring of offensive coordinator Sterlin Gilbert. Texas demoted offensive coordinator Shawn Watson in the middle of the 2015 season and Jay Norvell was not brought back.

It was quite a moment.

Gilbert brought the Art Briles inspired offense to Texas, and it worked. The passing game was the best it had been at Texas since the Colt McCoy days.

It looked like things were starting to look up for the Longhorns and Strong, but every positive story came with a massive elephant in the room: A good recruiting class was to strengthen Strong’s job security at Texas. The fact that the school’s president came with Strong to hire an assistant showed that the administration was in full support of Strong.

The job talk was never far away from any story or topic involving the Longhorns.

Strong’s third season began with the Longhorns beating Notre Dame in front of the biggest crowd in the history of Darrell K Royal-Texas Memorial Stadium. The overtime win over Notre Dame is the only game that rival’s Strong’s upset of Oklahoma in 2015 as his best. The dramatic show included the debut of true-freshman quarterback Shane Buechele, who would go one to have one of the best freshman seasons ever at Texas, throwing for 2,958 yards and 21 touchdowns to 11 interceptions.

The Longhorns improved to 2-0 before traveling to California. Texas’ defense played so bad the current Texas athletics website doesn’t want to display the box score.

It was the second time in two seasons that Strong was replacing a coordinator in mid-season.

The defense did improve slightly the rest of the season. But the next game was against No. 20 Oklahoma, a team that would later play in the Sugar Bowl and finish 11-2. Texas lost 45-40 but a late Texas score makes the final a little mis-leading.

The Longhorns won three of their next four games, the lone loss being a 24-21 defeat on the road against Kansas State, and  Kansas State coach Bill Snyder gave Strong some encouragement.

It became obvious that the brightest light for Texas in 2016 would be junior running back D’Onta Foreman.

The power back from the Houston area broke Earl Campbell’s consecutive 100-yard game streak at Texas. He finished with 2,049 yards on the ground for one of the best rushing seasons in the history of the University of Texas– a history that includes two of the NCAA’s top 6 all-time rushers, Ricky Williams, Cedric Benson and Campbell.

Foreman ended the season with the Doak Walker Award and was third-round draft pick.

As Foreman became the major on-the-field story for the Longhorns, the last three games of the season, however, effectively ended Strong’s term as head coach.

A 24-20 loss at home to West Virginia was followed by a trip to Kansas.

Any other year — including the previous season — this would have been a great bounce back win. Not this year. In the most stunning loss in years, facing a team that hadn’t won a Big 12 game since November 2014, the Jayhawks beat Texas in overtime 24-21. The goalposts were brought down in Lawrence as jaws dropped in Austin.

On the following Sunday, Statesman reporters Brian Davis and Kirk Bohls broke news that Texas officials had decided to fire Charlie Strong, but nothing was official.

The next day, Strong went to his weekly press conference and take questions about his job status. Many members of the football team arrived to support their coach before the final game of the season against TCU.

On the same day Strong lost his final game — the Friday after Thanksgiving — Houston coach Tom Herman took questions following his own loss to Memphis that same day. He had been rumored as the next head coach at LSU, but that never happened because it appeared there was another player in the Herman sweepstakes. In his first season at Houston, Herman had led the Cougars to a Peach Bowl win over Florida State. The next year he led the Cougars to wins over ranked teams Oklahoma and Louisville.

He was the hottest name in coaching in a long time.

Charlie Strong was fired Saturday morning. Hours later Tom Herman was hired at Texas.   The move was announced at 4 p.m.

The next night Herman was introduced as head coach of the Longhorns.

Strong finished his time at Texas with one of the worst records by a coach, 16-21. He had the shortest tenure as Texas head coach– three years– since Jack Chevigny, who went 13-14-2 from 1934-1936. Strong wasn’t unemployed for long. A few weeks later he was named the head coach of the South Florida Bulls.

Herman was a former graduate assistant at Texas and officially became, like Fred Akers and David McWilliams were to Darrell Royal, the first Brown disciple to coach the Longhorns.