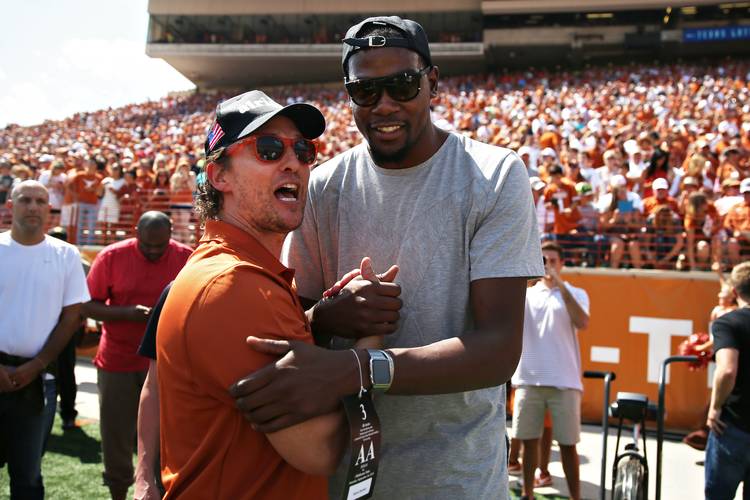 Texas opens the season against Northwestern State on Nov. 10, it’s time to get excited about the upcoming men’s basketball season. Each day until the start of the season, we’ll give out a starting line up of five things you need to know about Texas basketball.

So when you think of certain programs, you can easily think of positions. Kansas produces great centers. Kentucky produces great point guards. Duke produces players that all seem to have punch-able faces (we kid, we kid). But you catch the drift.

Well, few teams have done a finer job with producing power forwards over the last 20 years than the University of Texas.

OK, at first you read and say “Brad Buckman? But yeah, Buckman edges out a handful of NBA power forwards like Tristan Thompson and Myles Turner because he stayed. Buckman is part of some of the best teams in Texas history. He played on the 2003 Final Four team, the 2004 Sweet 16 team and the 2006 Elite Eight team. He started 115 of the 129 games he played in and finished with a career average of 8.5 points and 6.3 rebounds. In a vacuum was Thompson and Turner better and more important for Texas? Sure, but Buckman’s lasting presence at Texas makes him a must in the top 5.

Burditt averaged 14.9 points per game as a junior and 15.7 as a senior. As a junior he added 14.1 rebounds per game for a double-double average. He reeled in 897 rebounds in his career and added 236 blocks, at the time a program record that Chris Mihm would break.

The 1980 Southwestern Conference Player of the Year averaged 17.8 points and 7.9 rebounds for Texas. H left Texas with 1,897 points, sixth all-time. He led Texas to 1979 tournament. Texas would get back there for another 10 years. The year before Baxter led Texas to the NIT Championship. He has the third-most double-doubles in program history and was the voted the team MVP in 1977 and 1978.

In just a short time at Texas, the Dallas native worked his way into being the No. 2 pick in the NBA draft and has gone on to become the second-greatest Longhorn NBA player ever. Aldridge missed nearly half of his freshman season after starting 16 games and averaging 9.9 points. He came back for a sophomore campaign to help lead Texas to the Elite Eight while averaging 15 points per game and 8.2 rebounds. He was named the Big 12 Defensive Player of the Year and was a third team All-American. The 6-foot-11-inch forward (who sometimes played center) went on to become the highest drafted player in Longhorn history when the Portland Trailblazers took him second. Kevin Durant tied him the very next season when the Seattle Supersonics took him second.

Yeah, yeah. Turner and Thompson were left off this list because they were one-and-dones, but Kevin Durant is the second-greatest “one-and-done” player in the history of college basketball– google “Carmelo Anthony, Syracuse.” Durant was the National Player of the Year, Big 12 Player of the Year and an All-American. He averaged 25.8 points per game– a freshman record that will never be broken. He grabbed 11.1 rebounds as a freshman. He also shot 40 percent from 3-point range. He won the Wooden and Naismith awards in his one season. The most damning thing about his college career is the loss to USC in the second round of the tournament.