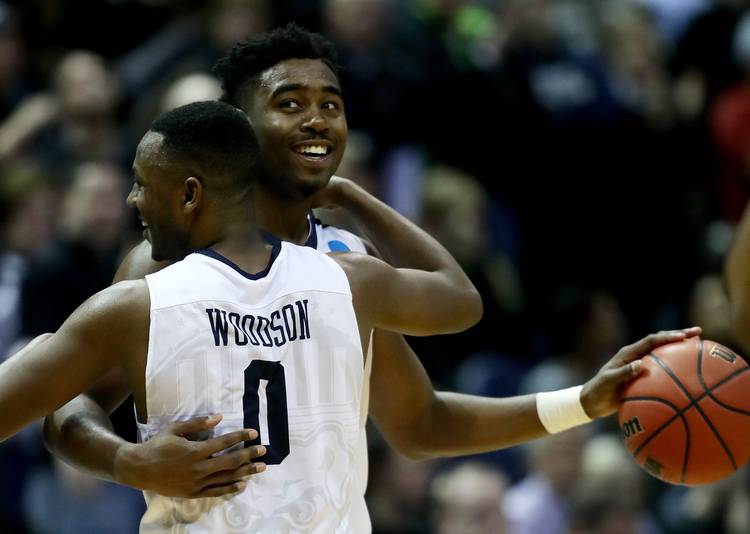 MILWAUKEE, WI - MARCH 18: Avery Woodson #0 and Kelan Martin #30 of the Butler Bulldogs celebrate after beating the Middle Tennessee Blue Raiders 74-65 during the second round of the 2017 NCAA Tournament at BMO Harris Bradley Center on March 18, 2017 in Milwaukee, Wisconsin. (Photo by Jonathan Daniel/Getty Images)

The hardest position to define in basketball these days is “small forward.” What is a small forward ? A big who can shoot? Or is that a “stretch four?” A 6-foot-5-inch guy who can rebound? Or is that a third guard? Then you can just have these players be called “wing players” which in a way works but also doesn’t answer the question.

Here’s what I think a small forward is: A player who can rebound (about 5-10 rebounds per game), can also shoot 3-pointers at high percentage (30-40 percent range or higher), who stands anywhere between 6-foot-5-inches and 6-foot-10-inches and is listed as either a “forward” or “guard-forward.” In other words, a “small forward” these days is hard to describe, but you know one if you see one.

Texas plays many teams with players who may or may not be small forwards, or as geeky basketball people will call them “threes.”

Duke, who Texas may play at the PK80 Tournament next month, has a lot of power forwards (Marvin Bagley and Wendell Carter) and a lot of shooting guards (Gary Trent, Jr and Grayson Allen), and will likely play a weird lineup with those guys and Trevon Duval on the floor. But they don’t have Jayson Tatum this year, a true small forward. They do have Jordan Tucker, a top 40 recruit listed as a small forward by 247 Sports, but who knows how much playing time he gets?

So, yeah, for the only time on these list, no Duke players, but otherwise, here’s our top five “small forwards/not quite a stretch four/not quite a shooting guard/ usual spot for a ‘glue guy'” Texas will play this year:

Smith is one of the more underrated player in the Big 12. At 6-foot-8-inches, the two-time All-Big 12 honorable mention player shot 39.5 percent from 3-point range last season while also grabbing 7.2 rebounds and scoring 12.1 points per game. He started 30 games for the Red Raiders as a junior. His per 40 minute averages are also impressive with 9.1 rebounds and 15.4 points. This year the senior from Plano will be the biggest difference between whether the Red Raiders make the tournament or not. Texas did a good job on Smith last season, holding him to seven and five points in both games.

As a freshman in the 2016-17 season, the 6-foot-8-inch Key averaged 12 points and 5.7 rebounds while shooting 33 percent from 3-point range. He started 30 games for the Crimson Tide and was the team’s leading scorer as a freshman. Key now has one of the best point guard recruits in the country, Collin Sexton, running the show. Expect Key to be even better with a year under his belt.

Ahmad, a 6-foot-8-inch junior from Cleveland, is back for the Mountaineers and will be asked to do even more for Bob Huggins’ squad this season. He started 32 games as a sophomore and averaged 11.3 points and 4.3 rebounds. He shot 39 percent from 3-point range and 48 percent from the field. With the graduation of Nathan Adrian and Tarik Phillip, West Virginia will need Ahmad to have an even bigger impact offensively than last season. Against Texas he scored just seven points in two games (Texas played West Virginia three times in 2016-2017, but Ahmad missed one game).

One of two Kansas seniors expected to start, Mykhailiuk has lost a reported 25 pounds this off-season after underwhelming physically at the NBA Draft Combine in May. He opted to return to school and will now, likely, be a three-year starter for the Jayhawks, who are projected to be a top 5 team in the nation when the preseason polls are released in a few weeks. Now Mykhailiuk is one of the players that no one really knows what his position is. He’s 6-foot-8-inches tall, but his natural position is guard. He’s never started a game at Kansas as a traditional backcourt player but at the same time, he’s not the greatest rebounder — just 3 per game. So yeah, he’s a “wing player.” What does he do well? He shoots. He really shoots. The Ukrainian who arrived at Kansas as a 16-year-old shot 39 percent last season and 40 percent as a sophomore from 3-point range. Mykhailiuk went through a shooting slump at the end of last season, otherwise those numbers could be even higher. He graded out as one of the best shooters at the NBA combine as well. He started 25 games for Kansas’ Elite Eight team last season and one of the reasons he’s not No. 1 on this list, is, for starters, he may not even start for Kansas because LeGerald Vick began taking his minutes last season. And for finishers, Mykhailiuk’s biggest weakness is his defense. Still, a slimmed down version of a 6-foot-8-inch guy who has shot 40 and 39 percent from 3-point range makes him one of the best Texas will play. Against the Longhorns last season, he was 0-for-5 from three with just two points in one game and 2-fort-4 from three with 12 points in another game.

The 6-foot-7-inch senior from Louisville, Kentucky, was a second-team All-Big East player last season and was a four-time Big East Player of the Week winner as a junior. He is the 23rd all-time leading scorer at Butler and will likely continue to climb that list this season. He started 21 games for a Sweet 16 Butler squad and averaged 16 points on 33 percent shooting from 3-point range and 42 percent from the field. He also averaged 5.8 rebounds. Butlers’ per 40 minute averages are impressive with 22.3 points and eight rebounds. Per 100 possessions, he’s averaging for his career 32 points and 12 rebounds. Martin is the best player on Butler this season. If Texas can slow him down at the PK80 Tournament, then maybe they’ll play Duke, likely preseason No. 1, and its crazy lineup.