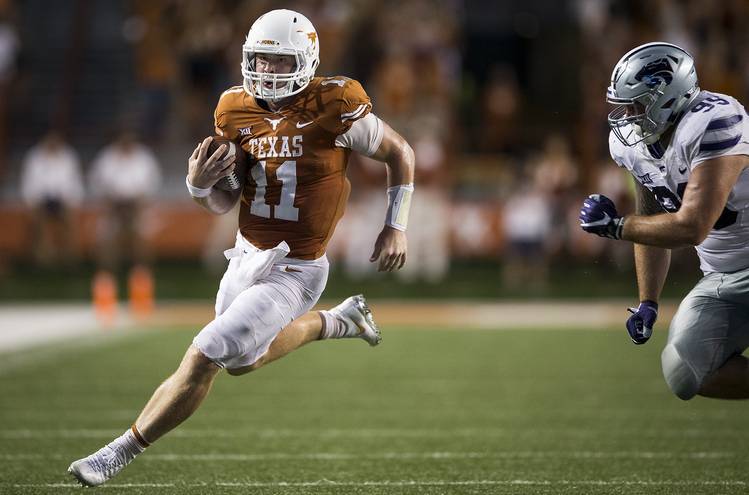 On the quarterback situation at Texas:

Tom Herman won’t announce his starting quarterback for the Oklahoma game because he doesn’t want to give Lincoln Riley and defensive coordinator Mike Stoops a heads up.

Give it a rest, Tom.

Hey, Todd Orlando: Baker Mayfield is starting for OU. Deal with it.

Herman is keeping the worst secret in college football. Shoot, there’s a kid in a Third World country wearing a 2009 Texas Longhorns BCS champions T-shirt who can tell you that freshman Sam Ehlinger is starting on Saturday.

Call it the game within the game. Also call it a non-story. Ehlinger is Texas’ quarterback for now and the future, that is unless Herman is really serious about this shuffle thing. The freshman more than proved his mettle in the win over Kansas State. You read here two weeks ago that he did enough to earn the starting nod after nearly pulling off the upset at USC.

Now he will butt heads with fellow 512-ite Baker Mayfield in the game both grew up wanting to play in.

Of course Mayfield has already lobbed a preliminary shot Ehlinger’s way by mentioning that Sam went 0-3 against Mayfield’s Lake Travis Cavaliers during his high school career.

Really love Baker’s competitive spirit and his willingness to talk a little smack, but that embarrassing loss to Iowa State doesn’t make for a glass house but a glass estate with two guest homes. How about we let our play on the field do our talking for us this weekend, no?

For the rest of Cedric’s Nuggets, including his thoughts on Jerry Jones and Deshaun Watson, click here.