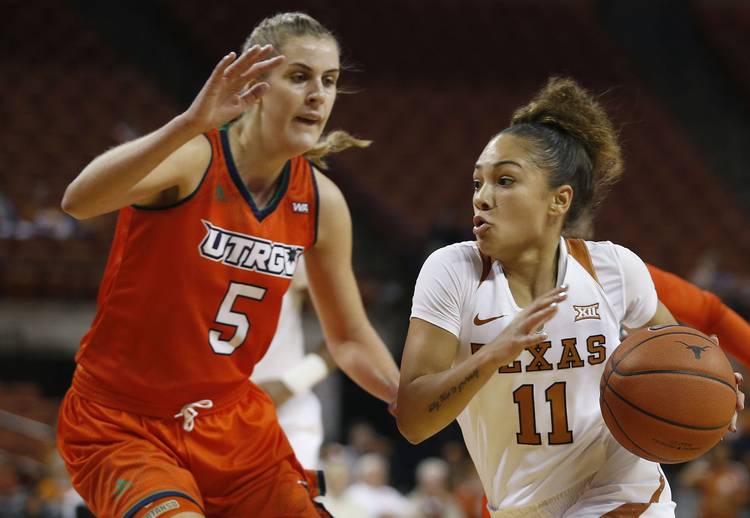 Texas' Brooke McCarty was named to the All-Big 12 firs team last season. She was the team's leading scorer. (Stephen Spillman / for AMERICAN-STATESMAN)

Jatarie White, projected to be the University of Texas basketball team’s starting center, has been named Big 12 Preseason Newcomer of the Year, the league announced Wednesday.

The 6-4 junior transfer from the University of South Carolina sat out last season due to NCAA rules. She was a 2014 McDonald’s All-American and two-time Miss Basketball North Carolina. She was the No. 1 post player in the country during her senior year in high school, according to ESPN.com.

The Big 12 also recognized Texas seniors Ariel Atkins and Brooke McCarty, who have been named to the All-Big 12 preseason first team.

Longhorns guard Chasity Patterson has been named Big 12 Preseason Freshman of the Year. The 5-5 Longhorn from Houston was ranked as the No. 4 overall recruit in the nation and No. 1 point guard for the class of 2017 by ESPN Hoopgurlz. At Northshore High, her teams compiled a 125-17 record during her four years on varsity and she finished with 3,177 career points, averaging 28.7 points a game as a senior

McCarty was the 2017 Big 12 Conference Player of the Year, becoming the first person in program history to earn that distinction. She led her team in scoring with 14.1 points per game and was the Big 12 Conference leader in three-point-field-goal percentage at .430 (77-of-179). Her 77 three-pointers made on the year were the second-most in a single season in school history.

(coaches not allowed to vote for own players)

Preseason Player of the Year

Preseason Newcomer of the Year

Preseason Freshman of the Year