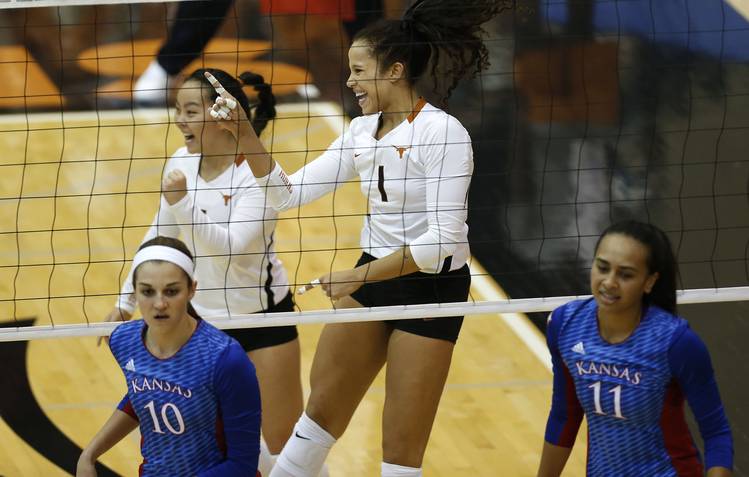 “Going undefeated so far through Big 12 play, it’s not easy to do,” McCoy said. “The big 12 is getting stronger and stronger every year that I’ve been a part of it.  Being undefeated right now, it’s great for us moving forward. We’ve just got to keep it rolling.”

Texas has wins over the teams that are ranked ninth (Kansas), 15th (Oregon), 18th (San Diego) and 25th (Baylor) in this week’s AVCA’s Top 25 poll. The Longhorns’ lone losses have been to No. 1 Florida and No. 6 Minnesota.

Texas is No. 6 in the RPI rankings, which factor in a team’s record and strength of schedule. UT’s place in the RPI and AVCA rankings could hold some sway when Texas’ seed — and ability to host matches — is determined for the NCAA tournament. Last month, Texas coach Jerritt Elliott said he didn’t think the Longhorns had to win all their games to secure one of the tournament’s top four seeds.

“It depends on what the rest of the country does, but I don’t think we have to go perfect,” said Elliott, whose team secured a No. 1 seed last year with a 22-4 record in the regular season. “Our focus right now is one point at a time. We can’t even look that far down the road.”

Kansas (16-3, 5-1) was led on Wednesday by seniors Madison Rigdon and Kelsie Payne, who combined for 36 kills. Payne, who was last year’s Big 12 player of the year, graduated from Austin’s Connally High. Rigdon is a Pflugerville native.

Do your homework: In addition to on-field signs, Texas baseball players have been asked to learn their history this fall. During fall practices, UT coach David Pierce has had his players do oral presentations on Longhorns legends.

In case you’re wondering, Texas junior Kody Clemens won’t be allowed to do his report on his father.

The Longhorns will host their Orange-White Fall World Series on Oct. 29, Oct. 30 and Nov. 1.

Know your history—this fall, @DP5hookem has every player doing a presentation on a Longhorn great.

Business trips: The cross country team will head to Louisville, Ky., this weekend for the Pre-National Invitational meet. The race will be held at the E.P. “Tom” Sawyer Park, which also will host the NCAA championships in November.

“With a lot of ranked teams this is a great opportunity for us to see where we are at as a program and also it lets you evaluate against the best in the country,” UT coach Brad Herbster said. “We’re excited to get the race going and really see where we’re at. We have to take advantage of this race.”

Texas’ soccer team also will hit the road. After battling Kansas on Friday, the Longhorns will close out their weekend at Kansas State (6-6-1, 1-3). Texas (11-0-2) is the only conference team without a Big 12 loss, though it does have two ties.

Bucking the line: Will Oklahoma struggle again as a favorite over Texas?