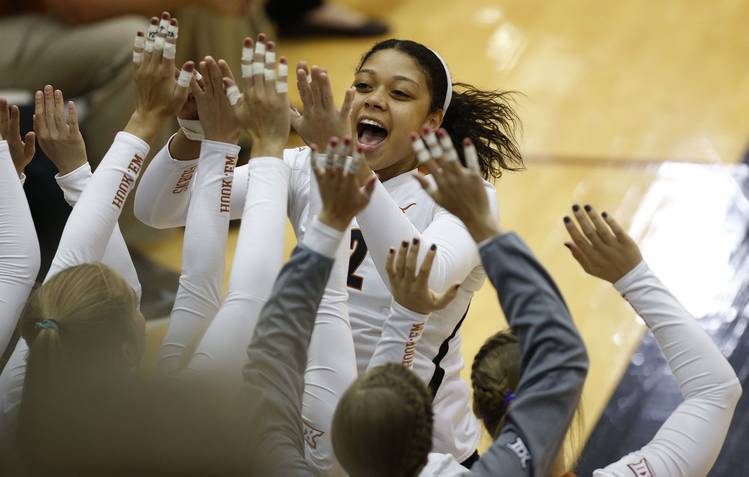 Texas' Morgan Johnson high-fives her teammates during a match against Kansas at Gregory Gym on Sept. 24, 2016. Johnson is averaging 1.38 blocks per set during her junior year. (Stephen Spillman / for American-Statesman)

Johnson is, after all, the only person who calls McCoy by her given name, Catherine. Half of the offerings on the junior middle blocker’s bookshelf deal with World War II. Johnson grew up watching the History Channel with her father and wishes she’d coupled the business marketing major she’s working on with a minor in history.

Johnson won’t rank her favorite Motown acts, but the collector of vinyl records isn’t feeling the Jackson 5. The Spinners’ “It’s a Shame” — which was released 27 years before her birth — is one of the top songs stored on Johnson’s phone. She’ll argue that “The Five Heartbeats” is a better Motown movie than the Temptations’ miniseries.

“I think it’s a way of relating to people,” Johnson said. “Listening to old music is a way of connecting to the past, I guess. I think it’s really cool; it takes you back.”

Johnson’s favorite Temptations tune, by the way, is “Just My Imagination (Running Away with Me).” The No. 1 hit is anything but a theme song, though. Johnson is making real-life contributions on the volleyball court for Texas.

Johnson is averaging 1.38 blocks per set this season, a statistic that trails only teammate Chiaka Ogbogu’s 1.66 in the Big 12. (Johnson ranks 35th nationally.) Two weeks ago, Johnson was honored as the Big 12’s defensive player of the week. One year ago, she led Texas with her 150 blocks.

The 6-foot-3 Johnson was an “M1” in head coach Jerritt Elliott’s system during last year’s run to the NCAA title match. However, she shifted to the “M2” position upon this season’s return of Ogbogu.

“She brings a sense of focus, and she’s just been great defensively and blocking for us,” McCoy said.

Johnson has also picked up her game offensively. While hitting .356, she is averaging 1.32 kills per set. Johnson registered a career-best 11 kills against Minnesota — the nation’s top-ranked team at the time — on Sept. 8.

“When you look at our team and you look at who to match up and how to stop people, I think Mo is the one that people are going to ignore a little bit more,” Elliott said after last month’s sweep of Kansas State. “What they don’t know is how much punishment she can do.”

Johnson began playing volleyball as a seventh-grader. She joined the club circuit the following year. She played four years of varsity volleyball at DeSoto High and received an offer from Texas before her junior year.

Throughout her development, Johnson honed her skills at home. She would work on hand contact by hitting a volleyball against her porch wall. In the living room, she routinely practiced her jumping.

“All my mom said was ‘As long as you don’t break a window, I’m OK,'” Johnson recalled.

So, did Johnson ever break a window?

“No, I made sure. She would have killed me,” Johnson said with a laugh.

Years later, Johnson is starting at a school where her father, Ivan, once played football.

With Johnson and Ogbogu at the net, Texas is leading the nation with its 3.38 blocks per set. Iowa State’s .226 hitting percentage is the sixth-best in the Big 12.

Texas (13-2) has won seven straight matches since its four-set loss to Minnesota. After that defeat, an optimistic Johnson said her team hadn’t yet figured out “exactly who we are yet.” A month later, Texas’ old soul is singing a new song.

“I feel like we’ve come a long way from the Minnesota game,” Johnson said. “I don’t know if we’ve completely solidified what it is, but we get glimpses of it. As our season has gone on, the glimpses have been longer.”