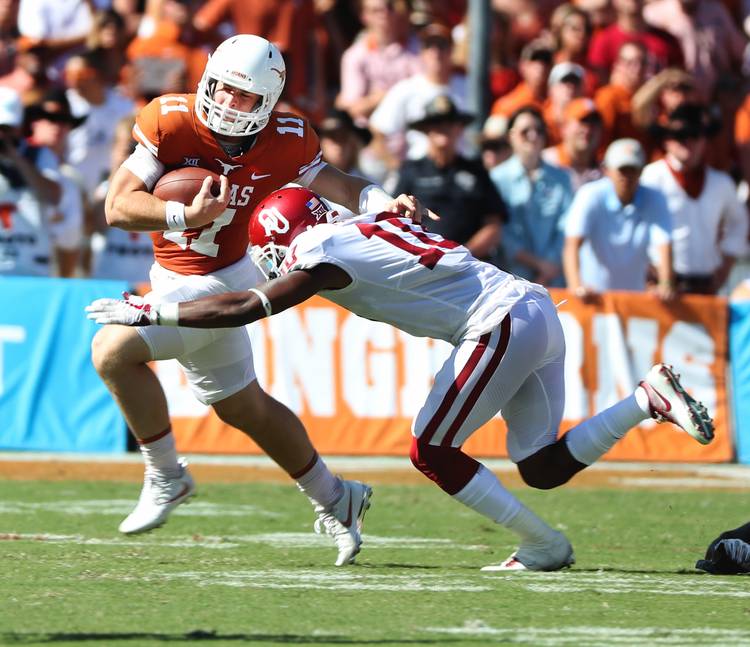 DALLAS — The Horns got hit in the mouth and didn’t respond until late in the second quarter.
I don’t know about you but this felt early on like something out of the early 2000s but Texas got it together to keep it competitive late.
Oklahoma owned the the majority of the first in all three areas — offense, defense, and special teams — and the result is a 20-10 deficit at the Cotton Bowl.

Here are my thoughts:

Sam Ehlinger beat the jail-break blitz with a nice throw to a wide-open Kyle Porter for a 16-yard TD pass to get the Horns on the board with 3:14 left in the half. Ehlinger spent the whole first half avoided a fierce OU pass rush which took advantage of some inexperience up front on that banged up Texas offensive line.
The freshman then led a late 52-yard drive that culminated with Joshua Rowland’s 34-yard field goal to end the half.
Ehlinger completed 10 of 19 passes for 113 yards and a touchdown while rushing eight times for 13 yards. He was sacked twice and has taken more hits than he should have. Lil’Jordan Humphrey had a big half with three catches for 48 yards.

He may have a 1-2 record against Texas but Oklahoma QB Baker Mayfield is as good as advertised. He is in complete control of this ballgame and undaunted by a Texas defense that has been aggressive in its pass-rush approach.
One play signified Texas’ struggles on defense in a half where we witnessed several breakdowns. Linebacker Malik Jefferson burst through the line on a blitz but whiffed on his attempted tackle of Mayfield, who then ran up the middle for 16 yards.
The biggest play of the half came on his team’s first possession when he avoided a tackler and lofted a perfect 52-yard TD pass to Jeff Badet who ran past Kris Boyd, who is having a real tough day in pass coverage.
His one mistake came late in the half when John Bonney read his eyes and stepped in front of Trey Sermon for a badly needed interception.
Mayfield finished the half with 197 yards on 11-of-16 accuracy with a TD and a pick. Trey Sermon was the ground star with 46 yards on eight totes.

It’s not over yet.
The Sooner defense has had its shaky moments in the second halves of games this season and the Horns showed a pulse in the second quarter.
The key will be if the Horns can get a pass rush on Mayfield, who played pretty clean the first two quarters. They need to introduce him to the turf early in the third quarter and let him know he’s in a football game and not a 7-on-7 scrimmage.