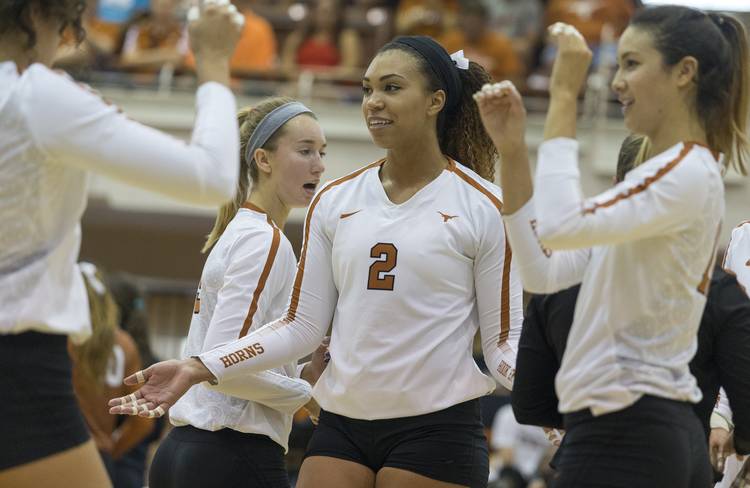 The Texas Longhorns volleyball team remained undefeated in Big 12 play with a sweep of Iowa State at Gregory Gym on Saturday.

Ashley Shook set up 33 kills to lead Texas in assists.

Micaya White and Cat McCoy led a strong defensive effort, combining for 25 digs. White led Texas with 14 while McCoy had 11.

“We did what we were supposed to from the scouting report, we were playing really good defense behind the block and were scoring at a high level,” said head coach Jerritt Elliott.

The Longhorns doubled up the Cyclones on blocks, leading 11 to 5.5. Ogbogu had 6 to lead Texas. Morgan Johnson added five while Nwanebu chipped in four. It was the second time this season Iowa State didn’t lead its match in blocks.

The Longhorns were in control of the match from the start, leading 15-8 before Iowa State took a time out. Texas ended the set on a 9-4 run.

The second set was much of the same with the Longhorns finishing the set on a 10-6 run.

Iowa State took a 4-0 lead before the Longhorns settle down in the final set. Nwanebu ended the match with a kill.

Texas takes on Texas Tech and Oklahoma on the road next week. They face the Red Raiders Wednesday at 6 p.m.