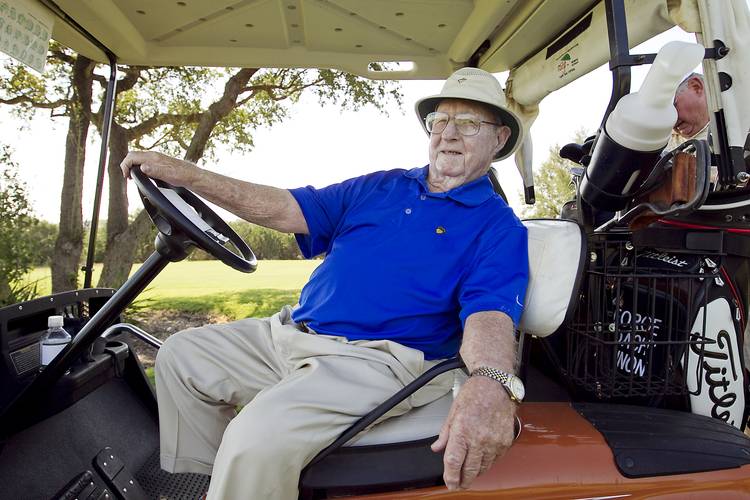 George Hannon, affectionately called "Coach" by nearly everyone, coached the University of Texas golf team for 18 seasons where he won two national championships tutoring such successful professional players like Ben Crenshaw and Tom Kite. He spends most days at the Spanish Oaks golf club in Bee Caves giving lessons and greeting members and friends. (Robbins story)

Legendary Texas golf coach George Hannon, one of the most successful coaches in the country who counted among his pupils major champions Ben Crenshaw and Tom Kite, died Thursday night. He was 93.

He was preceded in death by his wife, Jo, who died last week at age 91.

Graveside services will be held at the Texas State Cemetery at 11 a.m. Friday.

“I can’t tell you what he meant to all of us,” former UT All-American and two-time Masters champion Ben Crenshaw said. “Coach Hannon had an interesting way of communicating with the players. He never said too many words, but they were authoritative. No two people bled for the University of Texas more than he and Jo did. They went to every football game. They were very active in Texas athletics and very proud to represent the university. They did a wonderful job.”

“Obviously, it’s a big loss for us,” said Fields, whose team is competing in a tournament in Atlanta. “They were both an inspiration to Pearl and me. We will miss them. Coach was iconic in our history.”

Hannon followed another legend, Harvey Penick, as Texas men’s golf coach in 1963 and led the Longhorns to 12 Southwest Conference championships and two NCAA titles in 1971 and 1972 with Crenshaw and Kite.

Some of his other future PGA players he sent to the pros included Mark Brooks, Brandel Chamblee, Phil Blackmar and Rik Massengale.

“Coach always had a positive word,” Crenshaw said. “He talked a little bit like Harvey. He’d say something positive and something fundamental. He never got real complex. He always had the right words at the right time. And he was a darn good player. He treated everybody on the roster the same way.”

The PGA Hall of Famer was born in Kemp, Texas. The son of a pharmacist, Hannon fell in love with golf as a junior. He attended the University of Texas, but left the school to enlist in the U.S. Army Air Corps in 1941. He became a radio operator on a B-24 and flew 43 missions in the Pacific Theater during World War II.

He returned to Texas after the war but left school to become a club professional and began a career as a starter at Lion’s Municipal Golf Course in Austin. In 1953, Hannon became an assistant professional at Dallas Athletic Country Club, then accepted a job as the head pro overseeing Austin’s Morris Williams Golf Club and Muny. Two years later, he took the UT job.