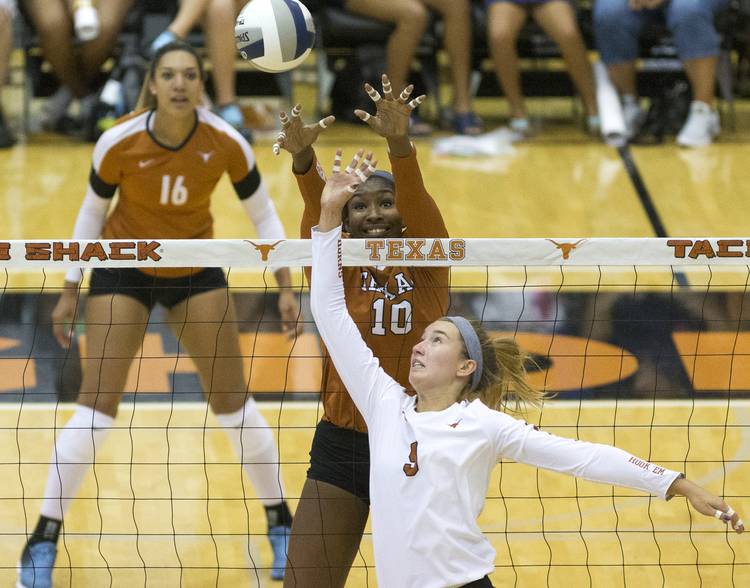 The top freshman in the Big 12 still plays volleyball at Texas.

On Monday, the Big 12 honored Texas setter Ashley Shook as its freshman of the week. Shook was recognized alongside Kansas senior Madison Rigdon, who hails from nearby Pflugerville, and Iowa State junior Grace Lazard.

Shook, who was the nation’s sixth-ranked prospect this past recruiting cycle, averaged 12.0 assists and 2.4 digs per set this past week. She also contributed four kills. The 6-1 Shook directed Texas to a sweep of Texas Tech and a 3-1 win over Oklahoma.

The freshman of the week honor was the second of the season for Shook, who ranks fourth in the conference with her 10.41 assists per set. Last week, UT outside hitter Lexi Sun won her third freshman of the week award. This was the eighth week that the Big 12 has handed out weekly awards.

After holding onto its third-place slot in the AVCA poll on Monday, Texas will host West Virginia this weekend. UT also announced that its home match against Texas Tech on Nov. 4 will start at 2 p.m. instead of 7 p.m. Texas is 16-2 with an 8-0 mark in conference play.

Golden: Sit Sam Ehlinger this Saturday even if he passes concussion protocol