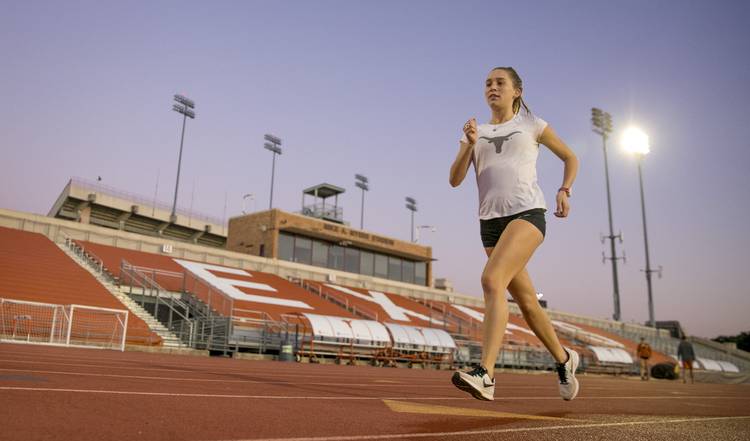 Texas sophomore Olivia Thompson practices at Myers Stadium on Oct. 26, 2017. Thompson, who has a severe hearing impairment, is one of the runners that will represent Texas at this weekend's Big 12 meet. JAY JANNER / AMERICAN-STATESMAN

On Saturday morning, Olivia Thompson will run at her goals.

The Texas sophomore is one of eight Longhorns who’ll run at the Big 12 cross country meet at Old Settlers Park in Round Rock. This is Thompson’s first conference meet and she’s aiming for a top-30 finish. She’s also hoping to help Texas return to the podium at the Big 12 meet; the Longhorns have had only two top-three finishes since 2003.

When Thompson runs, she keeps her hair tied up in a ponytail. Onlookers and other runners may notice her pink hearing aids.

Thompson was born with a severe hearing impairment that can at times be classified as profound. That means she can’t hear without the assistance of hearing aids. Her twin brother, Reagan, who is a student at Texas State, is profoundly impaired and cannot hear even with assistance.

Thompson has worked with speech therapists, so she communicates verbally like, as she says, “a normal-hearing person.” She’s fluent in both the Signing Exact English or American Sign Language methods of sign language. She also can read lips.

“People sometimes tell me ‘Hey, what’s that guy saying over there?’ I can do that,” she joked.

Thompson, who grew up playing soccer, was introduced to running while attending Greentree Elementary in Kingwood — Abby Guidry, a Longhorns teammate, also went there. The school had a jogging club that tabulated laps run over 10-minute intervals throughout the school year. She never won the year-long competition but she did develop a love for running.

“It makes me feel real happy, just to get out and run,” Thompson said. “In high school, I would forget why I liked it so much because I wanted to be successful. If I was winning the race, that’s why I liked it. Then I had to remember, like, I loved the sport.”

Thompson had already chosen running over soccer when she arrived at Kingwood High. During her freshman, junior and senior years she ran for a Mustangs squad that placed second, third and fourth at the state cross-country meet. Then it was off to Texas.

As a freshman last year, she competed in two cross country meets and won the 3,000-meter race at UT’s invitational track and field meet. This fall she placed sixth at the season-opening Aggie Opener and also logged Texas’ sixth-best time at the Pre-Nationals Invitational earlier this month.

“She’s earned that spot on the conference roster,” Texas coach Brad Herbster said. “Earning a spot on a Big 12 roster is always a big thing.”

Thompson’s impairment makes it tough to hear runners that are trailing here on the course. She also can’t wear her hearing aids if it’s raining, which was the case during a 10-mile practice run on Sunday.

Thompson, though, said her teammates do a good job of slowing their speech in rainy weather so she can read their lips. Guidry, who grew up with Thompson and her brother, also can sign. And UT teammates Meghan Lloyd and Destiny Collins have taken a sign language class at Texas.

“Liv is a great person. She’s so bubbly and she’s so genuine,” Collins said. “I think it’s cool I get to sign with her sometimes, too.”

Thompson, 19, is majoring in applied movement science, and plans to attend nursing school. Off the trail, she enjoys attending church, hanging out with her long-time boyfriend and shopping for athletic apparel. Among her recent purchases are Longhorns-decorated hearing aids that she says she’ll start wearing for track season.

And she loves rooting for her Houston Astros. Thompson’s mind, though, won’t be on Game 4 on Saturday. That’s race day.

The starting gun will go off at 10 a.m., and Thompson will go through her routine: Two granola bars and some Gatorade, then a prayer before the race. Then it will be time for Thompson and the Longhorns to start running down their goals.

“We had kind of a rough start at the beginning of the season,” she said. “We’ve gotten together as a team to talk about goals, what we need to work on and practice, and (about) how we work in practice and (how) we need to translate that to the race. We have some really good goals, and we’re excited.”