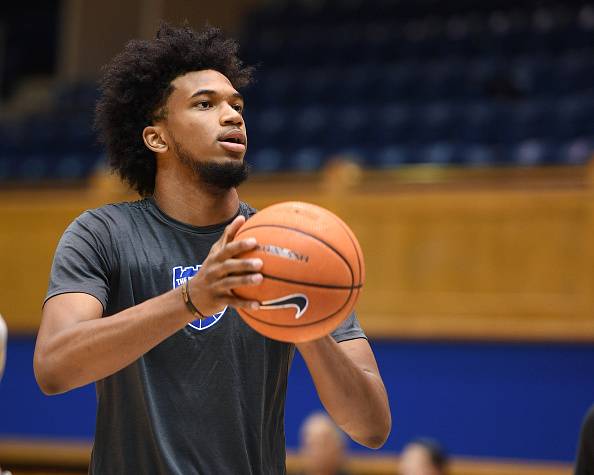 A few weeks ago we pointed out the incredible lineup of point guards the Longhorns are facing this season. That list could double as a “best point guards in the country list.” The second best position Texas faces?

From experienced players with final four reps to a pair of 5-star recruits to two foreign-born players who enter the season as possible conference player of the year candidates, the Longhorns will be banging in the low post with the best of them.

As for Texas’ power forward, Tulane transfer Dylan Osetkowski has drawn a lot of buzz from beat writer Brian Davis since coming to campus. He joins 5-star prospect Mo Bamba, who is actually listed as a forward, not a center like sophomore James Banks, making Texas very deep at the position. Bamba is 6-foot-11-inches tall and a standout defender, so don’t be surprised if he plays more center alongside Osetkowski, but we’ll just have to wait and see.

Here are the five best power forwards Texas will play this season:

The No. 20-rated recruit in the nation from Oak Hill Academy via Los Angeles, Preston is a 6-foot-10-inch, 230 pound forward and is expected to play a major role for the Jayhawks this season. Whether or not Kansas plays a traditional line up or reverts to last season’ highly successful four-guard look remains to be seen. But Preston, along with 7-foot, 280 pound sophomore center Udoka Azubike, in tow, Kansas may go back to the lineups that coach Bill Self has used to win the bulk of his Big 12 titles.

When Michigan arrives in Austin on Dec. 12, it’ll be Wagner’s third game against the Longhorns. In November 2015 at the Battle 4 Atlantis Tournament, Wagner, a freshman, scored seven points against the Longhorns and grabbed four rebounds in a Wolverine win. Last season, in a 53-50 Michigan win in Ann Arbor, Wagner scored 15 points and grabbed five rebounds with a block. The 6-foot-10-inch, 210 pound forward announced he was returning for his junior season this fall and when he did he instantly became the Wolverine’s best returning player. He averaged 12.1 points and 4.2 rebounds while shooting 39.5 percent from 3-point range. He started every game for a Sweet 16 Michigan team. Hailing from Berlin, Wagner was also the leading scorer in the U18 European Championships (Division B) in 2014 (Germany won) and was the leading scorer for his country’s national team in the 2017 FIBA Europe Under 20 team.

One of the elder statesmen of the Big 12, Lattin seems to be this year’s Perry Ellis as it seems like he was part of the same recruiting class as Wayman Tisdale. Whether Lattin is a center or a power forward is debatable. Clearly he was a center when Oklahoma reached the Final Four in 2015. And he probably was the center last year as well.  With junior Jamuni McNeace also in place at center, and Lattin a little undersized at 6-foot-9-inches and 200 pounds, don’t be surprised if Lattin is playing his natural position at power forward. And he won’t be a stretch forward. Lattin is an old school power forward. He averaged 6.3 rebounds and 8.4 points last season as well as 2.1 blocks. Lattin is listed as a forward on the Oklahoma roster, and his experience — 68 starts the last two seasons– makes him one of the best forwards Texas will play this season. Against the Longhorns last season, Lattin scored four points and grabbed six rebounds in Austin and three points and four rebounds in Norman.

The senior from Prievidza, Slovakia is the best player TCU has and a big key for the defending NIT Champion’s upcoming season. An All-Big 12 second team member and All-Big 12 first team defender, Brodziansky enters the season as the best power forward in the Big 12– hey, Bamba hasn’t played a minute of college basketball yet. Brodziansky averaged 12.1 points, 5.6 rebounds, 2.1 blocks and shot 36.7 percent from 3-point range and 77.5 percent from the free throw line. Per 40 minutes, he averaged 23.5 points and 9.5 rebounds. Per 100 possessions, he averaged 34.4 points, 5.1 blocks and 10.6 rebounds. In Big 12 play, the 6-foot-10-inch, 215 pounder averaged 15.7 points and 5.9 rebounds and 2.4 blocks per game. En route to making the All-NIT team, he averaged 16 points and 6.2 rebounds in the five game stretch. Brodziansky was named to the Preseason All-Big 12 team — one of five seniors on that team. Against Texas, Brodziansky scored 19 points and grabbed six rebounds while blocking three shots in Austin and followed that with an 18-point, four block and four rebound game in Fort Worth.

Oh how the NBA scouts and basketball fans everywhere want Texas to beat Butler at the PK80 Tournament later this month. If they do, Texas will play Duke in the next game, which means there’s potential for Mo Bamba to face Bagley, who reclassified late in the summer and joined Duke. Bagley is the potential No. 1 overall pick in the NBA Draft and 247Sports’ No. 1 overall recruit. The 6-foot-10-inch, 221 pound forward’s decision to skip his final season of high school and join Duke vaulted the Blue Devils to the top of many “way too early” polls and could be the reason Duke is the preseason No. 1 team in the upcoming AP poll.  How much did Bagley impact college basketball? Well not only did Danny Ferry and Duke allow him to wear Ferry’s retired number (yeah, I’m sure that took a long time to decide), but Duke went from 7-1 favorites to win next season’s championship to 3-1 in Las Vegas.  For this to happen, Texas needs to be Butler and then hopefully Bamba is playing power forward. Then we’ll get one of the best regular-season player matchups we’ll see all year.