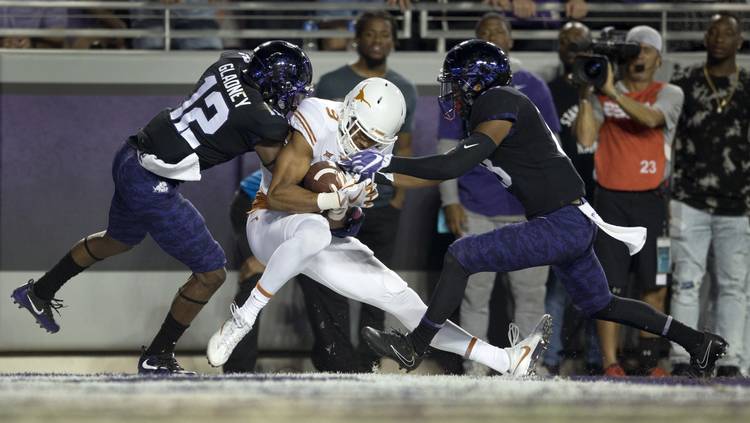 FORT WORTH — TCU 17, Texas 7.
And it could have been worse.
A few thoughts from the first half:

Texas offense needs to pick it up

We saw worse than nothing from the Texas offense in the first quarter — minus-two yards on only six plays — but the Horns woke up a bit in the second quarter as Shane Buechele completed passes of 37 and 33 yards, the latter a TD pass to Collin Johnson to get the Horns on the board.
Boo Jr. has protection issues up front and the Frogs are making these tackles work. The Frogs have four sacks already, two coming to halt a late Horns drive that had gotten to the TCU 31-yard line.

TCU’s biggest weapon on the first scoring drive of the game? The Texas defense which committed a pair of personal fouls to aid their opponent. TCU converted a nice throwback pass on fourth down that was nearly knocked down by Texas tackle Chris Nelson but Kenny Hill came down with the catch to set up a touchdown.
All told, Texas had three personal fouls in the first five minutes, which isn’t good for business, especially with an offense that has struggled of late to put points on the board.

We need to see more offense if the Horns are to pull off a much-needed upset. Shane Buechele has hit on a couple of deep throws, which appears to be the formula against this defense. TCU appears to be the more balanced team and looks poised to win by double digits.