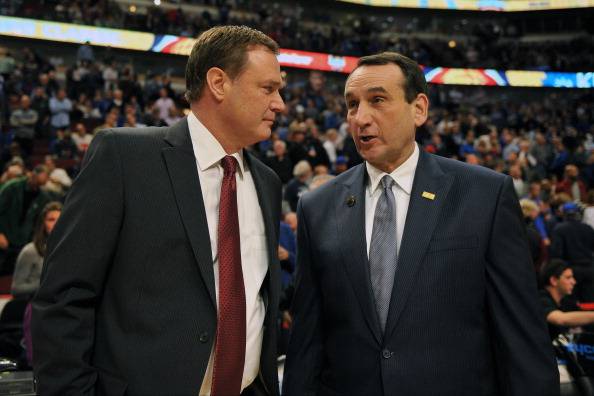 CHICAGO, IL - NOVEMBER 12: Head Coach Mike Krzyzewski (R) of the Duke Blue Devils talks with Head Coach Bill Self of the Kansas Jayhawks prior to their game during the State Farm Champions Classic at the United Center on November 12, 2013 in Chicago, Illinois. Kansas defeated Duke 94-83. (Photo by Lance King/Getty Images)

For the first time in conference history, the Big 12 will have an active Naismith Basketball Hall of Fame coach on the sidelines in Kansas’ Bill Self. The conference, which had just one coaching change this offseason, has five coaches who have taken teams to the Final Four. Two of those coaches, Lon Kruger and Bob Huggins, are two coaches who could possibly one day join Self in the Hall of Fame. All that and that’s not even mentioning TCU coach Jamie Dixon, a multi-time national coach of the year winner.

So just alone, the Big 12 features some of the best coaches in college basketball, and Texas (who has one of those Final Four coaches in Shaka Smart) will play them all twice.

Smart’s resume before coming to Texas included an amazing run to the Final Four in 2012, when he took the VCU Rams to the national semifinals after having made the tournament as a play-in team. Now in his third season with the Longhorns, Smart has another strong recruiting class and high expectations.

Here are the five best coaches Smart and his coaching staff will match wits with this season.

Beilein led the Michigan Wolverines to the National Championship game in 2013. Before that, he led his previous program, West Virginia, to an NIT Championship in 2007, an Elite Eight appearance in 2005 and a NCAA Sweet 16 run (ended by Texas). Before that, he coached five years at Richmond, going 100-53 with a second round NCAA Tournament showing in 1998. Before that he was at Canisius where he took that program to the NCAA Tournament. Smart has played Beilein and the Wolverines every season he’s been in Austin, losing twice. The difference is this game on Dec. 12 will be in Austin.

Michigan didn’t receive any votes in the AP Preseason Top 25 this year, but they do return Moritz Wagner, one of the top players in the Big Ten.

Before the Florida Gators had become a power in college basketball under coach Billy Donovan, Kruger took them to the Final Four in 1994. A little more than two decades later, now at Oklahoma, Kruger took the Sooners to the Final Four, becoming one of three multi-time Final Four coaches Texas will play this year. Kruger is the only coach on the list who has also coached in the NBA. In fact, he’s one of two former NBA coaches Texas will play this regular season, the other Alabama coach Avery Johnson. Kruger got his start at his alma mater, Kansas State, and took the Wildcats to the Elite Eight in 1988. Kruger coached the Atlanta Hawks from 2000-2003 and was 69-122.

Before he left for the NBA, Kruger went 81-48 in four years at Illinos. When he left the Ilini in 2000 for the NBA, they hired an up-and-coming coach from Tulsa named Bill Self to replace him. Kruger returned to the college ranks in 2004 when he became the coach at UNLV and went 161-71 with a Sweet 16 run and four tournament appearances. Since becoming the coach at Oklahoma in 2011 Kruger is 122-77 with four tournament appearances, and Final Four and Sweet 16 runs.

Led by 5-star recruit Trae Young, a Norman native, Kruger’s current Oklahoma team is looking for a bounce-back season after a Final Four hangover (and player graduations) which led to a dismal 11-20 season in 2016.

Like Kruger, Huggins has taken two programs, Cincinnati and West Virginia, to the Final Four. His team in 2000 at Cincinnati was the tournament favorite before a broken leg to Kenyon Martin threw a wrench into Bearcat history. Unlike Kruger, Huggins hasn’t taken every program he’s coached to the NCAA Tournament, missing the tournament in his one season at Kansas State and never getting the Akron Zips to the tournament despite going 97-46 from 1984-1989. Huggins’ became the coach of Cincinnati in 1989 and went on to win 399 games with the Bearcats while becoming one of the biggest celebrities in the Queen City. Huggins’ press defense helped the Bearcats reach the 1992 Final Four. He led Cincinnati to the Elite Eight twice and the Sweet 16 once and made the tournament every year from 1992-2005.

Huggins enters the year with 819 wins, second most of any coach Texas will (could) play this regular season. When he took over his alma mater West Virginia in 2007 he quickly returned to the tournament and guided the program to his first of four Sweet 16 appearances. In 2010 his team upset a Kentucky team in the  Elite Eight to return Huggins to the Final Four.

Huggins’ team this year is ranked No. 11 in the AP Top 25 preseason poll and features one of the best guards in college basketball, Jevon Carter, guiding the “Press Virginia” defense.

One of the newest additions to Naismith Basketball Hall of Fame is Bill Self. He was inducted this past September.  Have you heard that his teams have won 13-straight Big 12 regular season titles?

Under Self, Kansas has reached the Final Four twice. Kansas has been so consistent that Self’s five Elite Eight finishes in 14 years has become a criticism of the coach who is 416-87 overall at Kansas and 195-41 in Big 12 play (that’s a winning percentage of 82 percent in both cases).  Self won the 2008 NCAA National Championship and lost 67-59 to Kentucky in the 2012 National Championship Game.

Before he was at Kansas, Self was a rising star in the college basketball coaching ranks. He won two Big Ten titles in three years at Illinois and led the program to an Elite Eight and a Sweet 16 before his 2003 squad lost to– who else?– Kansas in the second round of the tournament. From 1997-2000, Self went 74-27 at Tulsa and guided the Golden Hurricane to the Elite Eight, their marquee win in that tournament run was a Sweet 16 win over No. 2 seed Cincinnati (coached by Huggins). Before Tulsa, Self was 55-54 from 1993-1997 at Oral Roberts, which included a 6-21 season.

Self’s Jayhawks are once again the heavy favorites to win the Big 12 and are on a shortlist of squads expected to contend for a national championship. Led by experienced guards and coming off back-to-back Elite Eight runs, Kansas is ranked No. 5 in the AP Preseason Top 25 poll.

Krzyzewski’s No. 1-ranked Blue Devils will play the Longhorns if Texas and Duke win their first games at the PK80 Tournament in Portland later this month.

Where to start with Coach K? He has more wins than any coach in the history of men’s college basketball with 1,071. He has a career winning percentage of 76 percent. He has won five NCAA Tournament titles, led the USA Men’s basketball squad to three Olympic gold medals and has 12 Final Four appearances.

A 2001 Naismith Basketball Hall of Fame inductee, Krzyzewski is arguably the greatest coach in the history of basketball on any level.

Before he was at Duke, Krzyzewski was the coach at his alma mater, Army, from 1975-1980. He never took that program to the NCAA Tournament and went 73-59 before Duke hired him in 1980. Krzyzewski didn’t make the NCAA Tournament at Duke until his fourth season. It wasn’t until 1986 did Krzyzewski make it out of the first weekend of the tournament, and that same year he went to his first Final Four. From 1986 until 1995, Duke went to the Final Four seven times, won back-to-back national titles and played in three straight title games. From 1986-1995, Duke went seven straight years of reaching the second weekend of the tournament and played in five straight Final Fours.

Duke missed the NCAA Tournament in 1995 when Krzyzewski took a leave of absence for back surgery. When he returned, Duke was back to making the tournament and hasn’t missed since. From 1996 to the present, Krzyzewski’s teams have won three more titles and reached the Final Four five more times.

This year his team features the possible No. 1 pick in the 2018 NBA Draft, forward Marvin Bagley III, as well as one of the best seniors in college basketball, Grayson Allen. Duke has a bit of an easier game to start the PK80 Tournament in Portland State, who has a first-year coach named Barret Peery. Texas needs to beat Butler, a 2017 Sweet 16 team with a new coach, LaVall Jordan, to play Duke.