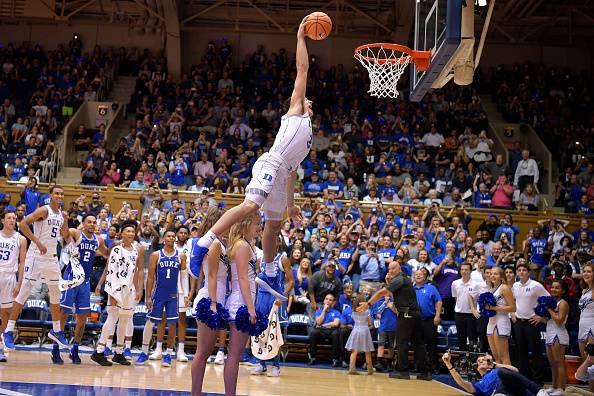 Texas’s non-conference schedule is loaded and potentially going to get even better if a few things happen. The Longhorns will play a lot of great players– especially point guards– but overall Texas will play good backcourts.

Some didn’t even make this list, like TCU who will return a talented backcourt of Jaylen Fisher, Alex Robinson and Desmond Bane.

Texas has one of the best shooting guards in the Big 12 in Andrew Jones or Kerwin Roach. Texas could start both guards this season in a three-guard lineup. Jones nearly left for the NBA last season and Roach is dunk master. Whoever the starting shooting guard is, they’ll have plenty of tough matchups.

That said, here are the five best shooting guards– or two guards — Texas will play this season:

As a freshman, the 6-foot-1-inch Baldwin led Butler with a 59 steals and was the third-leading scorer for a Sweet 16 team last season. Now a sophomore, Baldwin should have an increased role next to transfer Paul Jorgensen or incoming recruit Aaron Thompson. Texas plays Butler at the PK80 Tournament in Portland.

It sure does look like Duke is going to play three guards this season. Or it won’t– but it’s just because the amount of talent in Durham is off the charts. Trent is the son of the ” Shaq of the MAC” Gary Trent, who in the 1990s, while playing for the University of Ohio in the Mid-American Conference (the MAC) was a three-time MAC player of the Year who played from 1995-2007 in the NBA. His son isn’t a post player. He’s a 6-foot-6-inch guard and the No. 17-rated recruit in the class who hails from the same prep school that Kansas standout and No. 4 NBA draft pick Josh Jackson played at, Prolific Prep. If Texas beats Butler– a big if– Texas will see Duke at the PK80 in Portland.

It takes a lot for Kansas coach Bill Self to single out a player and heap praise. It takes a lot more for that player to have never played a minute at Kansas before he got that shout out from the hall of Famer. But Newman, the former No. 8-rated player in the 2015 recruiting class, got exactly that when at the end of last season Self said “I’d be disappointed if he’s not an all-league player next year.” The 6-foot-3-inch guard from Jackson, Mississippi was a McDonald’s All-American who played his freshman season at Mississippi State before transferring to Kansas. During an injury-plagued  year in Starkville he averaged only 11.3 points. With Devonte Graham playing point guard for Kansas, and LeGerald Vick and Svi Mykhailiuk also in the mix, Kansas is easily the best backcourt we know Texas will play and is one of the best backcourts in the nation.

The fifth-year senior is one of the few returning All-Big 12 players back and he’ll be the unquestioned best player for the Cowboys. The 6-foot-6-inch guard from Rowlett was a Second Team All-Big 12 player last season and averaged 17.5 points, 6.6 rebounds and was third in the Big 12 in 3-point shooting at 44.3 percent. Excitement isn’t exactly buzzing in Stillwater, especially since the Cowboys lost an assistant in the FBI scandal in September, but if Oklahoma makes a run to the tournament it’s probably because Carroll has taken things over.

Yes. Another Blue Devil, and we don’t even know if Texas will actually play Duke. Still, Allen is — like it or not– the face of college basketball right now. He’s one of the most polarizing college basketball players the game has had in years, possibly ever. The tripping incidents he’s had the past two years made waves and dominated nation headlines. But he also happens to be one of the best college basketball players of the last three years. Last year, in which he was preseason National Player of the Year, Allen somewhat disappointing with a 14.5 points per game average, but he was also playing out of position for much of the year. As a sophomore in 2015-2016, he averaged 21.6 point, 4.6 rebounds, 3.5 assists and 1.3 steals. As a freshman he helped Duke win a national championship. Allen will likely be a preseason All-American and he won’t have to play point guard this season, meaning college basketball could see the Allen of two years ago again… and maybe he won’t trip anyone?