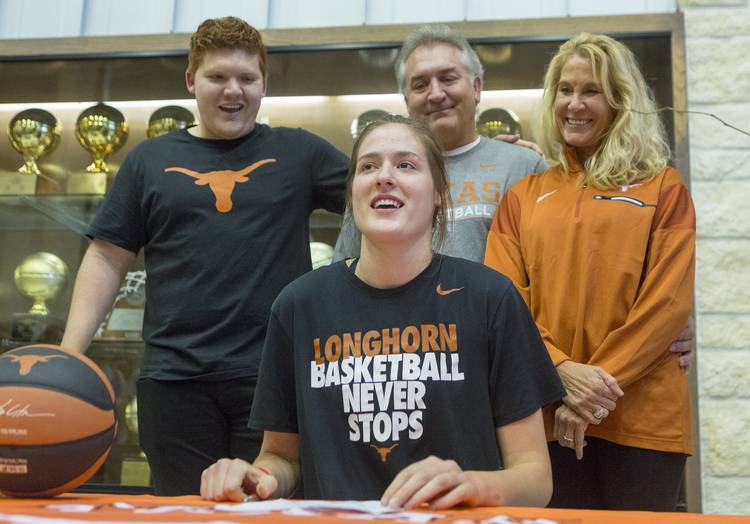 Sedona Prince signs a copy of her letter of intent with brother Diego Prince, father James Prince and mother Tambra Prince during a signing day event at Liberty Hill High School, Wednesday, Nov. 8, 2017. At the University of Texas Sedona will be the second tallest player in UT women's basketball history. (Stephen Spillman / for American-Statesman)

Boyette, now a player of the WNBA’s Atlanta Dream, set a high standard for defensive excellence as a Longhorn, guarding the lane like an angry vulture while becoming a vocal leader on the court. Prince, the Liberty Hill senior who signed with Texas on Wednesday, expects to strike a similar presence when she arrives next year.

But there’s more to Prince’s game than intimidating opponents with her extraordinary height and knack for swatting shots aside.

“Imani was very dominant down in the post and was an amazing player, but she didn’t have the outside range or shooting game that I have,” Prince said after gathering with family, friends and teammates at a signing ceremony in the Liberty Hill gym.

Prince was one of four players who signed with the Longhorns, along with Mont Belvieu Barbers Hill post Charli Collier, Houston Cypress Falls guard Joanne Allen-Taylor and Fort Worth Boswell’s Audrey Warren.

Texas coach Karen Aston already has a nickname for the group: The Fab Four. The Longhorns’ class was rated No. 3 in the country by ESPN. “In my eyes,” Aston said Wednesday, “they (Prince and Collier) are the best post players in the country for this class.”

Tennessee and Connecticut, which signed four players each, were ranked No. 1 and No. 2 in ESPN’s class rankings. Texas was third, right ahead of Louisville; Baylor was No. 7 and Texas A&M was No. 8.

The Prince-Collier combo gives Texas a dimension that will be lacking this season. Both are natural shot blockers who guard the rim. Prince — who was offered by Texas when she was in the eighth grade — has led Liberty Hill to an 82-7 record in her high school career.

“She’s very skilled, but the best is yet to come,” Aston said. “At 6-7 she can do things that (guard) Brooke (McCarty) or any other can’t do, and that’s control the paint. She’s going to have an immediate defensive impact because of her length.”

Prince, who moved from California to Texas when she was 6, said she fell in love with the sport when she watched Texas and Baylor collide at the Erwin Center.

“It’ll be fun to win a lot,” Prince said. “We’ll grow so much as players and as people, so it’ll be really fun.”

Liberty Hill coach Chris Lange was among the witnesses for Prince’s signing ceremony.

“Being able to coach Sedona has been a blast,” Lange said. “She is truly one of a kind. She brings life to any room because she is truly living in the moment. Sedona is not only a great athlete, but she is a great person with good values.”

Charli Collier, F/C, Mont Belvieu Barbers Hill: 6-4 standout is rated either No. 1 or No. 2 overall by various recruiting sites. Has 247 career blocked shots.

Audrey Warren, G/F, Fort Worth Boswell: Ranked 80th overall in the country, she’s regarded as one of the nation’s top wing players.